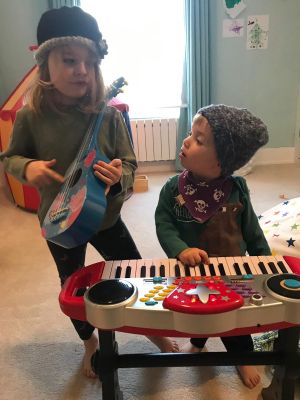 And oh God, this is why you don’t stay up til after 1am when you have kids. On Friday I had shaken off our recent bug enough and had enough sleep to make a day of boisterous play and story writing seem like the best fun - today, with maybe three hours of sleep under my belt, things were a bit tougher. I didn’t have a hangover to add into the mix, though I know someone who did. Ha ha ha. Don’t laugh too loud.
We walked the kids to the rec so they could cycle and scoot and chase bubbles. On the way back we came through the field and I pointed out a few small piles of stones around the perimeter to my daughter and wondered who’d been doing that and what kind of a hero they must be. I couldn’t tell her the truth, of course, but I could indoctrinate her into the belief that collecting and piling up stones is admirable. Not that I have to. She collects stones all the time and brings them home - not usually from my facred field form whence no ftone must be ftolen (unless you are backing this kickstarter), though she did take a few today. It’s in her DNA, I told my wife. Who didn’t seem impressed.
It's still not easy being a parent, but it feels to me like a golden time, when the kids are cute as Hell and having fun together and throwing in some surprises. It's hard to appreciate the golden time cos you still want to sleep and the little one keeps trying to kill himself by sticking anything he finds in his mouth. But my daughter telling me stories or even seemingly starting to feel existential dread and my son's goofy attempts to explore the world are mind blowing. "Do you ever get sad?" asked my daughter today. "Yes, sometimes," I replied, "But not so much now."
"But you are sometimes sad?"
"Yes, sometimes.... But you make me really happy.... are you ever sad?"
My daughter looked up at me and I thought maybe this conversation was leading somewhere.
"No," she said, with a smile. Seeming happy that I wasn't always happy, but she was.
The kickstarter is doing well, though there’s an awful long way to go and genuine jeopardy about whether we’ll make it. It will put us in a bit of a hole if we fail, but we’ve been in holes before (and also will end up in one eventually), but I am optimistic. It does seem to rely on my tweeting about it quite heavily though and then people come through. We got a good splurge this morning, which is weird cos you’d think all the good people would be in church. It’s almost like once the Christians backs were turned the rest of you got giving. Maybe the heathens have the most charity. Of course there’s every chance that either stone clearing or Me1 vs Me2 Snooker will one day win the Turner Prize. And if that happens the £50 you could spend on getting the stone or the ball in the perspex case will be rewarded at least 100 fold. Not many artists sell works for this tiny amount of money and remember you’re also getting a T shirt and two video downloads and a load of other stuff too. Maybe if Van Gogh had thought to give away a t shirt with every picture he might have sold more stuff in his life time. Just saying.
It is always slightly mind-blowing that people are so generous with these appeals and it means so much to me that people who like my stuff are happy to put their hands in their pockets to keep it going. But as always it’s also great to keep everything free so that those who can’t afford to pay (plus those who think they should have everything free due to them being just awesome) can still enjoy everything I put out. I’d like to think that different people back each kickstarter, though I suspect there’s a big proportion of people who chip in every time. If you’ve enjoyed these 200+ RHLSTPs and the 100s of other podcasts or any of these 9795 blogs and feel they might be worth a tiny bit of a penny each to you, then please bung in a couple of quid.
My dream is that everyone who listens or watches would voluntarily give a pound a month for this output (and thanks to those of you who do that) and we could use the money to bypass the gatekeepers in charge of sitcom and film funding. But it’s unlikely to happen. But as you’ve noticed no doubt, we are exploring other ways that we can raise the money too.
For now if you want to back the kickstarter (and buy some bona fide art) head here.
And if you want to give us some money each month and get some nice extras (or a one off payment with no extras) head here.
I will continue churning out stuff as long as people want it. And please understand that I am well aware of how much it means when you’re giving up your hard earned money to fund this. I am very grateful and will try to make your investments worth it to you (and win the Turner Prize so you can cash in too).