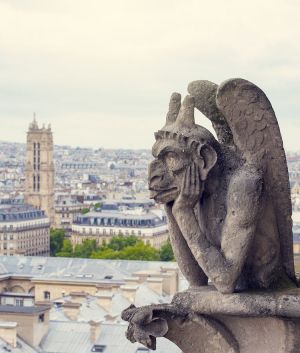 Oh, Notre Dame.
A shocking, horrific, sickly thrilling but heartbreaking sight as a thousand years of history went up in flames. It’s not quite clear what the level of damage is just now, but it’s certainly substantial, though the structure is thankfully going to survive. Something that has stood there for so long and then presumably some mistake made by a workman and it’s gone. As someone who is unable to create anything physical, the only way I can impact on the world of beautiful art (I am still an artist, but I trade in the unartistic and ugly) would be to destroy something. We all remember who created the Mona Lisa, but I tell you who else we’d remember, the person who destroys it. Fingers crossed it’s me.
Hopefully they won’t be able to pinpoint the individual who has taken down Notre Dame, though they might know who they are. And I wouldn’t like to see their Check a Trade rating after this.
I am making some empty jokes, but I am devastated by the loss of all this history and the work of those skilful and anonymous medieval hands. But nothing is permanent. Apart from the wall I am building.
I love history, I love the art created through religious devotion, I love the bits of bone and wood and metal that people think once belonged to saints or crosses (though you have to admire the presence of mind of whoever pulled the nails out of Christ’s cross with a claw hammer to preserve them for future generations - “Mate, what the fuck are you doing?”
“Just a little momento.”
“Jesus Christ.”
“Exactly. Shall I chip a bit of the wood off for you.”
“Shame you can’t get him to sign it.”
“I have a feeling he’ll be back. Can I have his crown of thorns too, please?”
“Why would you want that? It was a sick joke to parody him”
“I’ve just got a feeling time will turn that round into being a symbol of his strength in suffering.”
“It’s got his blood on it.”
“Even better.”
“You ghoul."
I genuinely do love all this stuff and it being lost, whether it’s genuinely from the cross or just a really old nail, is too much of a tragedy. And those stained glass windows and those old timbers...
I’ve been to Notre Dame a few times, but it’s one of my only memories of my first ever visit to Paris with my family, where we climbed up one of the towers and looked over Paris and I became fascinated by the gargoyles and the one that is pictured here particularly. They were creepy, they were funny and I think that’s part of what appeals to me about them, as a comedian. They are a centuries old joke that we are still able to enjoy today (not sure these gargoyles are as old as the cathedral though). Which isn’t true of many centuries old jokes, either lost to the past or lost in translation. Make a joke in stone and you have a chance at comedic immortality. (And yes plenty of people have sent me a photo of that gargoyle who is sucking his own cock - I love the transgressions and anarchy hidden away on buildings that are meant to be perfect and holy).
I hope my gargoyle survived (I think he's on the bell tower so there's a good chance he's OK). It was one of the first pieces of art that really communicated with me and led to a mini obsession with these weird creatures that eventually ended up with me attempting to write a kids book about the gargoyles of Oxford. Nothing came of it, but I appreciated their magic and their appeal to the young.
I leant over the parapet to get a photo of that gargoyle back in, what, probably 1978? When something has been there so long, you feel like it is permanent. And in this day and age you assume that any fire will be kept under control. It was only when I saw the spire fall that I thought that the whole place might be gone that the enormity of it struck me.
The fire fought art and the people fought the fire and managed to prevent utter destruction. All of the human spirit caught up in this creation, destruction, magic, fantasy, reality, God moving in a really fucking mysterious and slightly mental way, Satan trying and failing to bring Him down.
Notre Dame will rise again and the work that we do today will hopefully one day be a thousand years old. And even more memories will be caught up in the place and then vanish with us when we die. Good luck bored/peeved/cheeky gargoyle with your head in your hands. Hope I get to see you again in the stone.