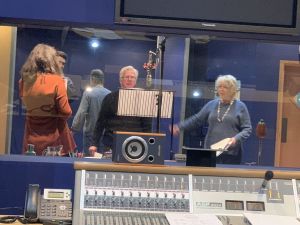 Doing a sitcom is awesome. I love Relativity. Sign me up for another 22 episodes.
Just like giving birth you all entirely forget the pain of delivery once the baby has arrived. Just ask my wife. She’ll tell you.
I can’t even remember what the writing process was like. I assume pretty easy.
It was really lovely to be back and the cast slipped back into their characters immediately. And the scenes we did made us laugh and weren’t shit. I was even pretty pleased with my own performance, playing a sleep deprived dad arguing with his wife… I wonder why I was good at that.
We have six episodes to record in five days, but we were ahead of schedule today - got two or three extra bits done and still finished two hours early.  So that was encouraging. Or worrying. We might find more problems with the later scripts, but we only did one scene on the day where I felt like I maybe hadn’t quite down the final rewrite. But I bodged my way through.
I watched the first recorded scene through the fish tank window in the studio and suddenly remembered what an amazing cast I have for this show. What an honour it is to watch them at work and how nerve wracking to know that my acting was taking place alongside theirs. But I did feel, unusually, that I did a fair enough job today. I am playing a version of myself, which maybe is cheating, but that's no guarantee that I will get it right.
It didn’t feel like a year since we’d last all convened here. In fact it was 14 months ago, but it felt like it might have been a few weeks. Back to eating sandwiches with puns on the wrapper, whilst milling around with other actors recording elsewhere in the studio. Including today the most ultimate of the actors, the Actor Kevin Eldon. Was nice to see his stupid Galen from the Planet of the Apes face. Also there was Ella Kennion who played Captain Sinker, the original and best pirate captain in Cbeebies Shipwrecked. As all I watch is Cbeebies nowadays that was what I led with and she asked if I had young kids now. I was tempted to say no and just make out I watch the show anyway. Though to be fair, fifteen years ago I was daily watching Big Cook Little  Cook and I didn’t have kids.
Unusual to have a full working week, with a start time and end time (10am start rather luxuriously, but that still meant leaving home at 8.30am and I only got to the studio with one minute to spare). The commute will be the most stressful part of the process as the sat nav continuously tries to find a path through that will save me a minute here or there and then change its mind back again.
I have the cushiest of lives, when even the harder working days are as pimpsy and enjoyable as this one.
I was even talking about the possibility of doing more. I am a fucking idiot.
My car got a bit dirty on the way in, but Alison Steadman didn't even look at it anyway.