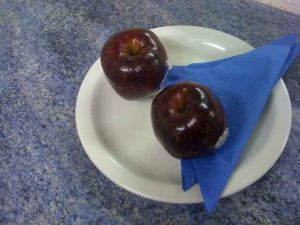 Rather a lovely morning. Stayed over night with my old headmaster, who kindly put me up after the Bristol gig, then walked down to my old school to be interviewed by a couple of students for the school magazine.
As I walked through the gates I realised that none of the pupils at this school were even alive when I left it. Almost 24 years have gone by since the day I walked out the gates for the last time as a student. More worryingly it's nearly 20 years since I left University. My oh my that time does fly.
The school looks pretty much the same from the front. The main building is the same and the ruins of the Saxon chapel and the concrete blocks marking out the pillars of the Saxon Palace that was discovered when they were building the school are still there. But things have moved on somewhat inside.
I was immediately impressed by the flat screen TV in the lobby and the highly professional school magazine that I read as I waited. The kids that interviewed me had a laptop computer. Back in my day the Kings of Wessex had a handful of BBC computers which were mainly used by people to make a swear word appear over and over again on the screen - Alas I have forgotten quite how that worked, though I am sure some of you remember.
Something like
10 Print "Wanker"
20 Goto 10
But I know that is wrong.
The youngsters interviewing me were in what we would have called Upper Three, but which I believe is now called Year 11 (Why do things change? Or stay the same? I can't cope with either), which made it slightly strange to be discussing my show with them, because of course, they are the same kind of age as the younger me that the present day with me takes the piss out of and then argues with in the show. It's hard to explain to a 15 year old why the views they have now and the way they express them will be high comedy after the passage of a quarter of a century.
They seemed to be smart kids though and were hopefully interested in the ramblings of this hairy old man who had once studied at this school when they were just molecules swirling in the ether unaware of what future awaited them.
They took a photo of me dressed in the current school uniform out by the Saxon chapel where I had been photographed back in the 80s, which was rather fitting.
After the interview I went up to the staff room. Only three teachers from my schooldays remain, Mrs Tibbs, Mr Goodchild and Mr "Tadger" Targett, who some of you may remember appeared as a guest on TMWRNJ when it was revealed that DNA tests revealed he was related to a 10,000 year old skellington found in Cheddar caves ("So in 10,000 years, your family has moved 500 yards"). Mr Targett ended up showing me round the school, which has seen massive improvements since my day. There are brand new class rooms, a swanky library and even a drama centre. I was seriously jealous and was thinking of trying to pretend to be 15 and see if I could sneak back into school again. I am sure I'd get away with it. It's been done before. Though maybe not by a 41 year old.
I hope the kids of the Kings of Wessex know how lucky they are. They don't know they're born.
As I drove into Taunton later a huge flock of black birds or bats (though I am reliably informed they were probably starlings) were swooping through the sky in massive numbers, looking like a swarm of angry bees being buffeted by the wind. It was an ominous sight filling me with foreboding. Was the gig being cursed? And if so were all the other people driving past this amazing wonder of nature also going to have their evenings ruined.
When I got to the dressing room I discovered that I had been left nothing but a few bottles of water and two of the reddest apples you have ever seen. They looked like something out of Snow White. Chillingly evil. Especially given that that was all that was on offer. Were the Tauntonians trying to poison me? I risked eating half an apple anyway. And then a few minutes later a lady arrived with a plate of sandwiches so things didn't seem quite so wicked.
And if there was a curse anywhere amongst all this it didn't seem to materialise, as the gig was another lovely one.
The three hour drive home in the dark and the rain reminded me of why touring is not so much fun though. Luckily I made it without falling asleep, thanks to a massive injection of junk food. Which I have managed to avoid up to this point on the tour. Still alive despite the starlings and apples. No one can curse me!

Good news if you like in Wolverhampton - the gig has been moved to a larger venue, so there are now tickets available for th show.