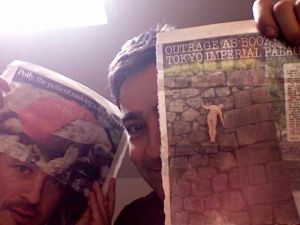 My hectic working life finally got to me today on the 8th straight day of either working hard or traveling to another country and back. I don't think I've got up after 9am this month, which might not sound that early to you, but for me it really is.
I did more work on my "Bad Habits" radio show. My first task was to interview a German doctor called Johanes, now based in Swansea, over the phone about cicadian sleep rhythms and whether some people appear lazy only because they operate on different sleep patterns to the rest of us. Ironically I was so tired that it was very difficult for me to follow his rather technical overview of the subject. He was also mainly concerned with people who were depressed or suffering psychiatric problems, so my attempts to lighten things up by asking if I could blame my inability to work on having unusual sleep rhythms did not go down too well. I had also done a test designed to see if I suffered from ADHD. In the self-administered test, where I had to tick boxed based on questions, I hit the requisite four grey boxes out of six to suggest that I might have a problem. Johnannes suggested I come to Swansea for further tests, but I told him that I was worried that sorting out my problems would destroy my comedic mojo. In any case, if he tested me further I am sure he would find there was nothing wrong (as long as I didn't tell him about CNPS) and I wouldn't be able to tell people that the reason I behaved so oddly was because of my ADHD.
After that I jumped into a taxi with the producer and headed to Victoria for a visit to the London offices of Google, to see how they treat their staff. And they treat them pretty amazingly well. I'd much rather work here than the post office! Not only are there soft drinks and snacks laid on all over the place for free, and an amazing free staff canteen, with food that is as good as pretty much any restaurant you could go to - certainly way above any work canteen I have ever been in - but also they have a games room and a chill-out room filled with deck chairs, massage chairs and hammocks. Proper massages are laid on and there are Segways that you can use to navigate the offices and employees are encouraged to "pimp their pods" by personalising their work stations. Though next week the offices are having an arguably more important visitor, the Queen, and so they were in the process of redecorating for her. I didn't take too much offence.
It's clear that if you treat your employees well then they will work a lot harder for you. I was mainly impressed that amongst the snacks were Green and Black's chocolate, and they let me take a bar for free. If only I could program computers I would be out of this comedy lark now and stuffing myself with chocolate all the live long day!
Once I was finished there I had to shoot home to record a surprise Wednesday Podcast. Despite a couple of coffees I was massively knackered and lethargic and Collings had to pick up the slack a bit. Although being, as I was, practically asleep, I did come up with some stuff that was coming out in a dreamlike state. So it might not be very funny, but it's weird and inappropriate and that's surely all you want.
I had planned to go to they gym, but instead lolled around before heading off to Camden for dinner with some friends in Wagamama's. I realised that we were sitting next to Nick Grimshaw, the Radio 1 DJ. I know I shouldn't know who he is, but I've heard him a few times when I've been driving to gigs and been surprised by his seeming stupidity (I am sure it's just an act for the radio) and had looked him up to find out who the Hell he was and how he'd got the job. After his meal he dashed off, leaving a bag behind, which we discovered contained a posh lightshade from Heals, which cost Â£75! So he's obviously doing OK. He realised he'd left it and came back, just as we were wondering if we could take the item back to the shop and get a refund. "That's the third time I've left that behind today!" he said. So maybe the stupidity thing isn't an act after all.