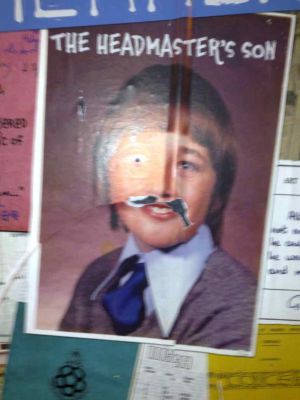 On the way into my venue tonight, coming in from the Victoria St entrance, I noticed that someone had had a little go at my poster. They had ripped off the bit of paper that the PR people had stuck on quoting my Chortle review and thus ripped the poster a bit. Presumably, I thought, this was some disgruntled punter (dispuntled?) who had seen the show and didn't think it was worth that many stars and decided to reek their revenge (because it's not like someone can just come and replace the poster and the quote). It's strange to think that I can rouse sufficient anger in people to do this. Maybe they didn't like the religious content or the paedophile jokes. Or just me.
Then I spotted that not content with removing the quote the vandal had also chosen to scratch out the pupils of my eyes. Which is a bit cold. It didn't strike me what was mainly unsettling about it until later - the picture is of me at the age of 10. I wouldn't mind them scratching out my adult eyes, I might even find it slightly funny. But to do that to a 10 year old boy seems unreasonably sick. Like something out of a less horsey and more papery version of Equus. Especially if the person scratching out eyes had been offended because of religious reasons or because they didn't like the paedophile joke. Suddenly them scratching out a 10 year old's eyes seems a lot worse. Of course I don't know why they did it and maybe it was just a random attack. And really I still find it quite funny. But what would motivate someone to do such a thing? If it was you who did it then please let me know. And don't take out your grievances on the 10 year old me. None of it is his fault.
I took a photo late in the night, but the flash just makes the whole thing look all the more evil, or like something out of the Mighty Boosh. I also look like I've been given a large moustache, but that is just from where the poster got torn.
The gig tonight was almost a sell out and went very well, but annoyingly practically all the seats at the sides were taken by a party of (apparently unaccompanied) Portuguese school children, who clearly mostly didn't have enough English to follow what was going on. One of them talked almost all the way through, which was incredibly distracting. I tried to address it quickly, but aware that the show is overlong already and that every second is precious. In another show, where there was no story and where the pace was not so important, this would have been a gift, but after doing a little bit of banter I was forced to get all school teachery and just ask the girl to be quiet. It created a slight tension for a while, but luckily I got through most of the rest of the show OK and managed to slip in a few gags about Portugal along the way (mainly asking them if they were from Spain and then when they said Portugal saying it was the same thing).
I don't know what brought them to the show - perhaps they saw the poster and thought it was being done by a 10 year old. Or maybe they saw the graffitied one and liked the idea of a show where children would have their eyes poked out. The smallest girl in the front row was totally oblivious to what was going on, but rather sweetly clapped whenever the rest of the audience did (which they did a few times, which is always a good sign). I made a point of thanking her for her applause, knowing she was just following the herd and didn't know what was going on, probably, for example not appreciating my references to early 1980s Grange Hill or Frank Worthington.
Edinburgh is a strange place and God knows what they made of it. I am pleased I didn't let it wreck the show and it was the right thing to just get on with it, even though all comedic instincts were dictating that I should be milking it for all I was worth.
Maybe I am big in Portugal. Who knows?

Oh and if you would like your own copy of the Headmaster's Son poster, to put on your wall or to deface because you hate children and wish that they had no eyes, then you can now buy one, along with a few other selected old show posters from the good folks at gofasterstripe.com. They are five pounds each or three posters for ten pounds. It's the perfect gift for any Richard Herring hating psychopath, Christian or anti-paedophile.