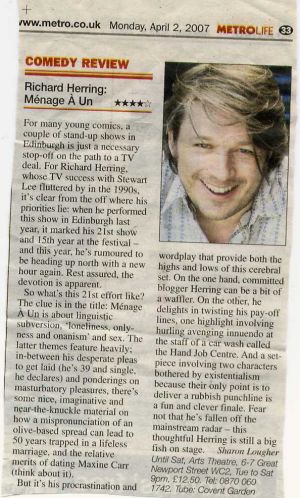 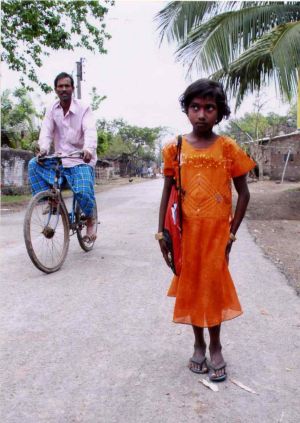 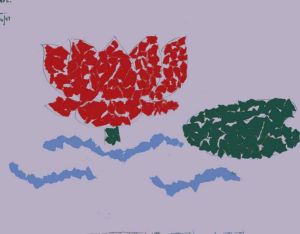 There was a nice enough review of the show in the Metro today. It's a free paper that commuters tend to read on their way to work, so it's no bad thing to get a good mention.
I had woken up late and had an email about it, so went to see if I could locate a copy, which isn't always easy after the rush hour has passed, but I found one in a recycle bin and extracted it, looking like some kind of insane tramp, no doubt.
Later having a coffee I noticed another copy on the table next to me. I wondered if it would help the promotional effort to push the show if I left the paper folded open at the page the review was on. I thought I would give it a go. It would increase the chance of the next person sitting there deciding to see my show. As an advertising campaign it is even lower rent than writing your chosen message on a cardboard box and holding it up at people.
Do you think Elton John puts his reviews face up on the table next to him? Do you think Peter Kay would do it? Would Ricky Gervais steep so low? Actually, Ricky probably would, but like him, I have a lot to learn about being a proper celebrity. If I hadn't been aware that what I was doing was pathetic and ineffectual then surely it would have been tragic, yet still there was a part of me thinking this might help. So draw your own conclusions. If idiocy ever becomes an imprisonable offence in this country (which part of me hopes that it might, stupidly) then Warming Up is like a prosecution case all neatly catalogued and tied up with a little bow.
More embarrassingly I had executed this manoeuvre whilst I was still drinking my coffee, so there was the real me sitting drinking coffee and then a picture of me smiling up from the table next to me. If anyone sat there they might look at the picture, look at me and then think I had put the paper there in the hope that I would get recognised. Like I think a 4 star review in the Metro makes me a big deal.
But that wasn't what I was doing. I was trying to advertise the show by any means necessary - taking Malcom X as my inspiration for all this, so if you think I am dumb, then you are racist (though that reminds me of a clothing shop that Stewart Lee once told me about - he might have been lying - called "Buy Any Clothes Necessary")
And the advertising thing is much less embarrassing than the vanity thing. Though only in the way that accidentally shitting yourself in public is less embarrassing than purposefully shitting yourself in public.
I felt it was unlikely that anyone would see the photo and realise it was me, so left the paper there in the hope that it might be spotted by someone who would be swayed to see the show. But after about five minutes a little old lady came up and asked me if she could have the paper. She didn't look like my typical audience member and I doubted that she would even read the comedy reviews section. Luckily she did not notice the picture was the same as my face, partly because I turned my face away a bit and tried to look as miserable as possible.
I will look out for her in the audience though and let you know if she enjoyed it. Pre-sales looking very healthy this week, so don't leave it to the last minute. Due to it being Easter weekend, Tuesday, Wednesday and Thursday are actually selling better than the weekend. Don't miss out on the fun!

Later I did a benefit gig at the Comedy Store for the One Child charity. The Store is one of those venues that gives me the slight fear, as it reminds me of my early stand up career and my many humiliations therein. Even though it is now in a different location, it's the same place in my head. Though I had a couple of nice gigs there in 1990, and one of the most exciting experiences of my early performing career was to see my name on the board outside in little plastic letters (really doing well at scotching those accusations of vanity), it still symbolises the more mainstream stand-up circuit that I have never been a part of. Playing the late shows here is a kind of torture and I greatly admire the comedians who are brave enough to do it regularly and who are good enough not to be booed off by the intimidating drunk audience.
Tonight's crowd were impressively drunk for a Monday night and I was on in the middle third, so their dedication to alcohol was all the more impressive. But despite pre-show jitters I had a lovely time, getting big, almost terrifying laughs for my newly discovered one liners. It would have been fun to surf the laughs a bit more, but I only had eight minutes, so I got on with it. But it was a good feeling to conquer another demon, even if it was charity gig (though this is no guarantee of a friendly reaction as I found out the one other time I have played this venue.
Papa CJ who had organised the event and I know discover set up the charity did a great job as a newer comedian amongst an impressive line-up of more experienced acts. He also gave us all a rather charming gift of a picture made by one of the kids that the money is going to help. My picture is by Rekha Khatun and I am guessing the person in the orange dress, rather than the man on the bicycle. If it's the girl then I think it's a very good picture, but if it's the grown man then I think his work has been sloppy and childish.
But hilarious jesting aside, this is a fitting memento of a fun night and a good cause and it puts my vainglorious actions of the afternoon into some kind of perspective.
Then I got drunk to make sure I didn't get my life into too much perpsective and so be forced to reconsider everything I say and do.