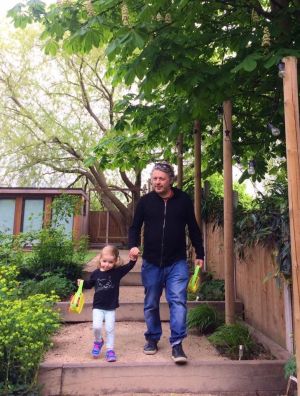 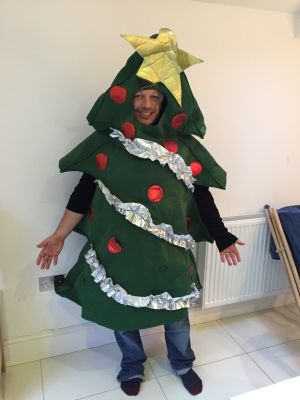 Chocolate dinosaur delivered this morning to a delighted toddler who happily pulled his head off. Like her father Phoebe likes chocolate and maybe ate more today than she has in the rest of her life combined. But what a wonderful day it is when you breakfast on chocolate and your father’s face cake.
When this is happening for the first time (that you remember anyway) do you think the world has gone mad for a day or that this is the start of a new world order? I think possibly the latter.
We went round to friends for an Easter egg hunt, further evidence that society had broken down and now chocolate was the only food resource. Phoebe and I went around the garden, each with a little yellow egg handbag and harvested the treats. She understood that she wasn’t meant to take all the eggs, but also helped me by handing me a chocolate treat each time. She knows her daddy gets it. Chocolate is the best. We have created a bond that will only be ended by my untimely death due to obesity.
One of the other kids there was as boisterous as Phoebe and they had a fine time running around in a circle together, only occasionally fighting over ownership of a toy that neither of them actually owned (which might be some kind of metaphor for adult politics, but I was having too much fun to notice).
Amazingly neither Phoebe or I were sick due to chocolate consumption. I am glad that the Easter Bunny died for our sins.
And there’s another load of RHLSTP and stand up eBay lots to bid on, including my dancing Christmas Tree costume and an AIOTM tea-towel. All proceeds go towards making more podcasts. Win/win!