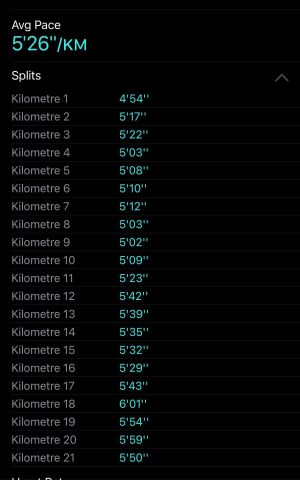 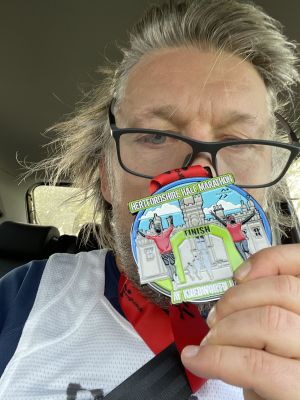 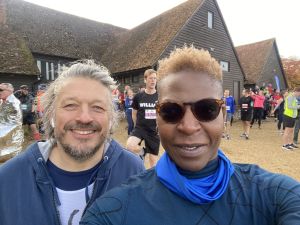 Up super early to beat the rush to Knebworth for the half marathon. If anything we got there a bit too early and spent an hour or so sitting in the car, trying to stay warm.  I was feeling pretty up for it overall - I could maybe have done with a bit more sleep - so was raring to go. So hanging about in the cold wind, wondering if I should make another visit to the loo or not wasn’t the best time of my life.
We were aiming for sub two hours, though I wasn’t sure I’d be able to make that as the route was hilly and our pace in training was a bit too slow for that.
But when things got going the adrenaline was enough for me to do sub 5 minutes for the first km. This was stupidly fast really, but the first km is a freebie and I left behind my more sensible running partner, who I assumed would follow me. We didn’t see each other again until the fourth of fifth kilometre and although she’s a much better runner than me, I managed to keep up with her until we were well over halfway.
I think I did the first 10km in 51minutes and 20 seconds and was at the halfway point in about 54minutes- If I could repeat that I wouldn’t be far off my personal best from 7 years ago (around about 1 hour 47) and that was on an almost entirely flat course.
My family had come down to support me at a point that was about mile 5 of the course, but which we also passed through on mile 8. I was full of beans both times and I picked up my son as I ran by and pretended I was going to hold him for the rest of the run. As I put him down one of my ear pods got knocked out and I had to scrabble under a car to find it, losing valuable seconds.
The kids had made signs saying “Go Richard, Go!” (and I admire their choice to call me Richard rather than Daddy). Though on the return journey they were inside the car and pushing them against the window, sensibly keeping out of the cold.
But things were warming up and the sun started beating down in a way that did not feel appropriate in November.
There was a long hill at the halfway point and suddenly my thighs were feeling heavy and my pace dropped, though I was still doing kms at under 6 minutes - I didn’t expect to do more than one or two at that pace, but in the end only km 18 went over six minutes (and only by a second and that was because that part of the course had a very steep hill). I knew I couldn’t get close to my PB now, but things would have to go  pretty badly for me not to come in under two hours.
In the first half I had been overtaking people, but in the second half I was mainly being overtaken.
On my last half marathon I had started fast and surprised myself that I’d been able to keep up the pace, but the last couple of miles this time were a little bit tricky. But I pushed on and was over the line in one hour, fifty-five minutes and one second. If only I hadn’t stopped to pick up my son I’d have done it in under 115 minutes. That is why love should be discouraged at all times.
I came 34th in the over 50 category (though was up against some 50 year old whippersnappers). There were about 75 people in that group, so that’s not too bad. I was 370th out of 681 men, though shamefully the race did not do a break down for one-testicled men and statistically there should have been two or three of us. I was 470th out of 1065 runners, which again is a decent result for a 54 year old man with one ball.
Paulette,  my training buddy came in a couple of minutes ahead of me and achieved her own personal best. I couldn’t have done any of this without her support and commitment. Those harsh Sunday runs had prepared us  very well.
It felt good to have done so well though and the justgiving page was less than £500 short of the £25k target when I checked it post race.  But there had been a pledge to double the amount raised today (up to £2500) so in fact the target had reached £27K and donations kept coming in on the day (at the time if writing it’s approaching £30,000 - go on, help get us over that).
It’s great to raise this money for the hospitals and be reminded that it’s less than nine months since I had my operation and less than eight since I had chemo. So it’s a great personal achievement, but also a reminder that cancer is not the end and that it can be survivable. I still don’t feel like I had cancer, but apparently feelings are not facts.
I came home with my medal and told the kids I had won the race, but in a way I had.