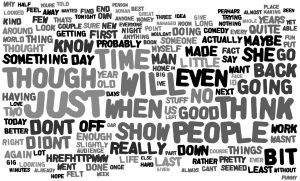 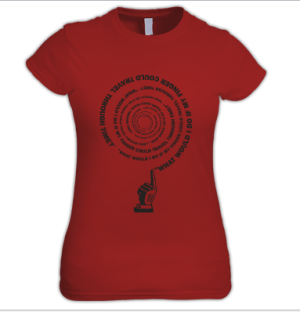 Happy 11th Birthday Warming Up. Jesus. Hopefully it's still younger than all the people who read it. I don't know if I could take it if this was being consumed by someone who wasn't even alive at the beginning. It's terrifying that it's been going on that long, but I suppose reassuring that I am still here to be writing it. Much has changed and much has stayed the same.

When I celebrated the 4000th entry Matt Whitby sent me a "wordle" of my most used words. Aside from stuff like "a" and "the" and "and" my most popular word is "just" with 11, 409 occurrences, though the wordle almost has a message, "Though time will just show people even when they think no good." Do you see it? Will time show people? How much more time? I hate those people when they think no good. By the 4000th entry I had written 3,294,220 words. Which is a bit frightening. If an infinite number of Richard Herring's wrote an infinite amount of blogs would one of them eventually be funny? Even Stephen Hawkings could not answer that one.

As a little birthday gift (that you have to pay for)- I found the shirt I wore in the menage a un photos shoot today. It's a little worse for wear, but it's clean (sorry about that pervs) and rather than throw it away I will offer it to the person who bids the most money to SCOPE by midnight on the 26th. Either tweet me or email me your bid and I will let the winner know (@Herring1967 or herring1967@gmail.com) Current high bid on Twitter is £70.

My wife almost gave me a very dramatic 11th anniversary blog as she came very close to being involved in an accident on the motorway (due to other's idiotic driving). Imagine the fun I could have had with that if she had been! She phoned me to tell me all about her near miss, which was a terrible shock to me, but luckily my new car is fine. But when I think of what could have been.

But thanks to the excellent braking system of the VW Golf I do not have an exciting/heartbreaking blog to write. Sometimes I wonder why I even got married when I get so badly let down.

It did make me realise the importance of cherishing what you have. We take our lives and happiness for granted and yet it can all be plucked away from us in an instant. I am still talking about the car, obviously.

I realise how lucky I have been in eleven years of blogging to have not experienced any terrible disaster or debilitating illness. I've been through some mild depression, some relationship bust ups and a couple of deaths, but not had the kind of tragedy that would make writing a blog seem inappropriate. As much as I can be occasionally frustrated by my career (though even that is getting harder), I have a charmed and wonderful life. And I probably owe that more to my wife than my car (it's about 60:40). She's been here for over half this blog and an eighth of my life and she'd better bloody well be here until the end of both of those things (whichever finishes first).

So I am pleased that my 11th anniversary was an uneventful day. I went for a run and tried out some new material at a tiny club above a pub near Piccadilly Circus. As I left the station I noticed a long alcove with the word "Telephones" still written above it. But there were no telephones there any longer, just a big gap and half a dozen taped up holes where the telephone lines had once gone through the wall. I hope the word "Telephones" stays there forever, long after anyone even remembers that phones were once attached to the wall, or that the only way to contact someone when you were out of the house was to put some coins into a slot in a public booth. Once upon a time there was enough demand for this that a station like Piccadilly Circus would need six phones and I bet even then you sometimes had to queue for them. I am not mourning the loss. The system we have now is way better. Progress is much more often a good thing, although people seem to concentrate on the negative. How many hours I wasted at University waiting for the people in the two public phone booths in college to finish their calls so I could have my turn. A  thirty minute wait was not unusual. It drove me insane and to be fair, that was a pretty selfish way to behave. A mobile phone would have made my teens and early twenties so much better.

But I want a kid in 50 years time to look up at that sign saying "Telephones" in Piccadilly Circus and be massively confused. Both by the word, which I imagine will be totally out of common usage and the concept. By then you'll probably be able to contact each other telepathically, but even if we're still addicted to mobiles and tablets, then the concept of public telephones will make them boggle and laugh and think of us as quaint old Elizabethans.

Of course, the world being what it is, the station will be redesigned and that space used for something else and the sign probably taken down. But occasionally the signs survive the upgrade (and a building that was once a school or a hat factory still has archaic words etched on it somewhere). Let "Telephones" survive. It's the best monument to the latter part of the twentieth century that I can think of.

A poignant eleventh anniversary blog, but thankfully not as poignant (or in fact non-existent) as it might have been.

My Christmas newsletter is now up here. If you want those delivered to your inbox then just sign up in the box on the right hand side (or unsubscribe).

SPECIAL OFFER
If you're buying tickets to a show or a download, then it might feel like you don't have an actual physical gift to give. Maybe you're buying a DVD but would like to make it a bit more special. So like a charitable Santa I am going to provide a service that will make everything wonderful for you this Christmas.
If you make a donation of at least £5 to http://www.justgiving.com/wereallgoingtodie I will send you a signed programme from any show of your choice (apart from menage a un, as I've run out of those). Make a donation of £15 or more and I will send you signed copies of all the programmes (apart from menage a un) and also signed leaflets for nearly every show (not Hercules Terrace). If you donate £20 or more I will send you all the programmes and leaflets and a signed copy of the "10" DVD which has my favourite routines from my last 9 tour shows + some extras (it's about two and a half hours of comedy). All this money will be going to SCOPE so you can feel doubly good about your gift. Just email me your address, which programme you would like (if you're only paying for one) and the name of the person you want the stuff dedicated to. My email address is herring1967@gmail.com.
BTW this includes the programme to "We're All Going To Die!" which would be a nice additional gift if you're buying tour tickets. Obviously try to do this sooner rather than later if you want to get the stuff by Christmas.
It's THE PERFECT CHRISTMAS GIFT.

We're adding new designs for T-shirts and sweatshirts at cottoncart.com quite regularly. Today we're putting one up based on the time travelling finger idea, which nearly looks a bit like a vortex and a question mark at the same time. Thanks to Stephen Newman for the designs. Let us know if there's anything you'd particularly like that isn't there.

My guest for the next RH Meaning of Life on 26th January is Professor Richard Wiseman and we'll be talking about the Paranormal. Get your tickets here. Only £10