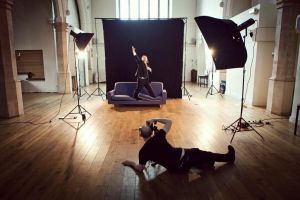 It's March and thus it's time to do the photoshoot for this year's Edinburgh Fringe. The wonderful Steve Brown and his assistant Ben Grubb were all set up and ready to go when I arrived at the church that was acting as our studio. Not that the church would feature. The Lord of the Dance Settee has a religious starting point, I suppose, but I was not going to be dressing up as Jesus again.

I was back in my frankly slightly shoddy wedding suit, which I had thought I had had dry-cleaned, but I hadn't. There was mud on it from the walk to the Leicester Square Theatre that I had taken on the last Meaning of Life record. And holes in it because I had foolishly thought that I could use the pockets of this expensive suit to keep things in. This is why I am not allowed nice things.

The concept for the poster is fairly simple - and to be fair there aren't many ways we could have gone with it, either dancing on a sofa or some kind of Michael Flatley parody. I was to sit on the settee and then Steve would superimpose figures of me dancing across it behind me. In a classy way though. I'd have been tempted just to have me bouncing around like a buffoon, but I think this will be better. It will definitely be better. Steve has done every poster since Hitler Moustache (though I think we used the old shot for Christ on a Bike poster, but his is the one on the DVD) and is really good at this stuff.

Although the initial seated shot was easy enough I did get a bit of a work out for the others, having to climb up on the arm of the sofa (which won't incidentally be the one used in the poster - we've got a smarter one for that) over and over again. Most of the other shots were done on the floor, though I did do a bit of sofa work and found that it's quite hard to balance and dance on a settee. I don't know why Jesus even uses one for dancing. Luckily it didn't take us too long. No make-up or graves to crawl out of this time and we were done in 90 minutes.

As always the title and the photo are pretty much all I have got, though at least this year the title comes with its own routine, so that's a couple of minutes of material. I want to do something a bit more light-hearted this year, that celebrates daftness and uncoolness and (at least for the moment) doesn't have a big subject at the heart of it. I want to try and think of an original way to advertise the show, without having to go back to the useless lamp post ads. I wondered as I walked home (I took a long walk across much of London) if I might be able to do a good pop video of me singing a punky version of the hymn (with sofa based lyrics). I have no idea whether that would work as a promotional tool, but it might be fun. I might do more free DVDs too, though I don't think it really helped get many people in last year.  It was nice to give people a little reward though.

I ambled across town after the shoot, stopping off in cafes to read about Rasputin, write my blog and publicise Meaning of Life. I thought I would take a punt on a facebook boosted post. Would that bring people streaming towards the free video on vimeo and then onwards to buy the longer version? I would have to say the experiment was a failure, though not a massively costly one. By the end of today I had spent about £50 to reach about 24,000 extra people. But only 305 engaged with the post and of those less than 200 watched the free video. Nice to have given some cash to facebook though. They do spend a lot of it snapping up apps so I wouldn't want them to go broke. I will just have to trust you to spread the word one person at a time. It's very, very, very slowly worked for the last ten years, so why give up on relying on that now.

I do massively appreciate the support that you are giving me on this. You are the best. I don't want any other johnny-come-latelys to find out about me. Keep the secret and I'll keep churning out the largely spunk-based material (though getting a bit slower at churning out the actual spunk in my old age).