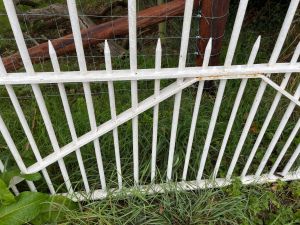 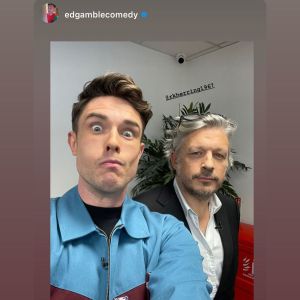 The giraffe has escaped from prison. I wonder what further atrocities it will commit.
Poor old Wolfie. Since she hurt her paw a week or two ago she’s been having a battle with her bandage and apparently the vet put the last one on a bit tight and she’s been chewing it off and hurt her leg more in the process. So she came back from the vet today with a rubber shoe and one of those big cones to stop her being able to bite herself. She was very sorry for herself, but looked so funny that I could only laugh. I hope I didn’t hurt her feelings. The cool dogs are going to be bullying her for a while.
I am finding that if I work at night I am now too tired to do much the next day. The kids mean I am up at 6.30am whether I like it or not and I operate very badly with no sleep. You can tell how bad I am by how early I have my daily Solero. 9.30am today which is a record. I have been snacking a bit too much recently and experimenting with eating chocolate (mainly successfully) but again that’s down to tiredness. I am not putting any weight on, but I am losing it very slowly. As pathetically gratifying as it is to have compliments about my recent Instagram posts, I am still chubby, according to BMI and also to my eyes.
And today I realised that I now weigh just under 13 stone, which is basically the weight I’d be at when I decided it was time to diet in my 20s (though I am sure I was much heavier than this sometimes). I definitely got under 12 stone back then, so that’s something to aim for. It still would not satisfy Ian BMI that I am no longer overweight.
Having a rapidly approaching deadline for my six radio scripts (currently one and a half eps written) is not going to help with tiredness or snacking, but I did manage a four km run today in spite or wanting to be in bed and also dashed round the supermarket like I was being chased by Dale Winton in between the two pickups I had to do from school.
I nearly fell asleep as the kids watched TV before the kids’ bedtime, but my son noticed and woke me up by banging my tummy like it was a drum (another confirmation that BMI is accurate in my case) and pulling my hair. But he then lay on me for twenty minutes hugging me and it was pretty much the most beautiful thing that’s ever happened to me. Yesterday Catie had sent me a video of both kids sweetly wishing me good luck on Taskmaster.  It’s just as good as it gets. I don’t know where these tiny idiots came from, but it’s been the best thing that they turned up. I hope they stay here forever.
Catie had told them about The Goonies which they are keen to watch now, mainly because it has a character called One-Eyed Willy in it. On the drive to school they talked about nothing else, believing that this name meant that he had a willy where his eye should be. I suppose my job as a parent is to discourage them from this sort of gleeful rudeness (though I think they were sincere and thought that that's what the film involves), but I giggled along with them. It's a funny image. I might as well just accept it's too late and I have created two more people with broken brains liek their dad.
Though to be fair, they will probably grow out of it. I guess there's still time for me to grow out of it too.