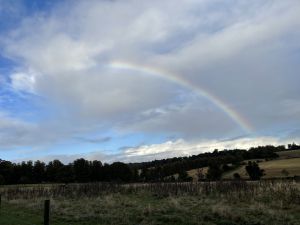 The curse of Snow White and the Seven Dwarves claims its final victim.
Spooky to think that everyone who worked on that film is now dead. And it’s a lesson to us all that mankind is not meant to countenance the idea of a woman living with seven small men.
Ruthie was extremely cool and I am genuinely sad to see her go.
A couple of weeks ago I found a pair of old much-loved boots at the back of the shoe rack. I used to wear them all the time, but then moved back to trainers. My wife had said I should get rid of some shoes as there wasn’t enough room in our storage and so to prove her wrong I put the boots on and pretended I was still using them. But the joke was on her (or maybe me) because I really liked the boots. It was this that prompted me to try and buy a new pair and then take the impetuous decision to buy some other boots on sale that turned out to make me tall.
But the website I bought from had also recommended a place to refurbish old boots called Pick Up My Repair, who would collect, resole and reheel (and heal) your footwear and clean them up and give you new laces. My boots were so knackered that I thought they might just send them back and tell me to stop taking the piss, but they were returned today (within a week of me sending them off) and they looked almost new. I was very happy to recommend them on Twitter, not for any reward, but just because it’s great to find a company that does its job efficiently and well. Give them a go for your posh shoes. I am delighted to have my old boots back in working order (as well as some new boots too). It will now be my trainers that clog up the shoe rack unused. Until my wife complains and I switch back, just to show her,
A huge and beautiful rainbow vaulted the sky on my dog walk this evening. The photo doesn't really do it justice and was taken after it had faded somewhat. At one point it stretched across the whole sky. It felt like there was a glitch in the Matrix and I was seeing one of the struts that held up the sky in this artificially created world. I am pretty convinced we are living in a video game. It’s the only thing that makes sense. Occasionally the graphics fuck up and you get to see through the artifice.
Pretty though. And a reminder that our video game creating overlords are not perfect. The rainbow is hope that we might one day escape their largely rather pleasant prison.