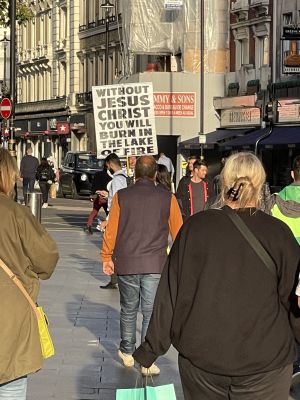 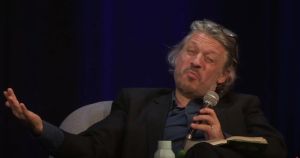 Third week in a row of driving myself into London and for the third week I didn’t pass a petrol station with any fuel. How are there even any cars on the road in London? Maybe there have been some fuel deliveries in the mean time, but it seems weird that I haven’t chanced on a single facility that’s open in all that time. I remember at the start they said it would be sorted in 10 days, but this has been going on for  longer than that. God help us all.
I bought some boots online a couple of weeks ago (having found an old pair that I hadn’t worn for ages and remembering how much I liked them) and at the last minute bought a pair that were in the sale because they were black and so would go with my suits. I didn’t realise when I purchased them that they have quite a pronounced heel on them. So pronounced that if I wear these boots and my wife is unshod I am slightly taller than her. I wasn’t sure I could wear them as people would naturally assume I was trying to pretend I wasn’t small. But then again, it felt quite cool being tall, even if I had to totter around on high heels. This could be the way forward. Think of how different my life could have been if I’d always been in high heels.
A man in Leicester Square was shouting through a megaphone and holding a big banner saying “Without Jesus Christ you will burn in the lake of fire.” And I thought Jesus loved me. If he’s burning me in a lake of fire because I don’t return his love then surely that means we’re in a very abusive relationship. Like Jesus is one of the those men who are the worst fucking people in the world. Or maybe all the sign is saying that Jesus is a nice guy and spends all his time holding up a big pyramid of people who are about to fall to Hell and stops them burning themselves. In which case He’s a pretty decent guy and sorry for the aspersions. I bet he wish he’d never started it though. Oh no, here’s another one to keep out of the fire. Maybe I should build some kind of net.
Anyway, nice to see a man so sure of his convictions that he builds a huge sign and shouts at people in the hope of harranging them into following the God of love and peace (and fire when He gets ignored). I’d already heard about him as it happened, but I guess it’s possible there’s a couple of people in central London who’ve never been told the story. So well done on spreading the good news (and not being afraid to concentrate on the bad news part of the good news). Either way you’re either falling into some fire or being held up just above a fire with a man with some quite serious wrist injuries already.
The podcasts were fun. Dave Gorman had kindly stepped in and come all the way from Bournemouth  to take part (even cycling part of the way) and we took the piss out of each other in an affectionate way and I tried to make him see the world from the perspective of a sentient log. Phil Wang has been coming in my ears all week, via his amazing audio book and it was great to chat to him about some of the themes, whilst acknowledging the racism of the Britain I grew up in, and also myself (in the 1970s). Mind Your Language is weirdly inclusive and tepid, compared to most of the racist stuff that was going on back then. It still amazes me that we were taught nursery rhymes with the N word in them. I couldn’t even tell Phil the first line of the (not nursery) rhyme that involved a man from China going to milk a cow. He hoped the poem would address the lactose intolerance of his people. But only a very kind reading of it might suggest that.
Both records went long and I felt blasted and not on top form in the second one, but I did at least demonstrate that Robert de Niro is one of the easiest impressions to pull off (captured on camera by David Frew).
These podcasts will be out soon, but if you want to see the impression and the boots then you’ll have to buy the live stream (proceeds to charity) - the whole series is still there to view and four fabulous guests still to come. Still tickets to see the last two shows live as well.