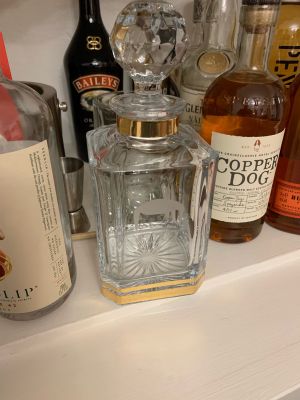 I just love playing House of Games too much. I knew after Day One that my best course of action going into the final round in the lead would be to say nothing, but still I had a crack. I was pretty unlucky/stupid to say Sacreblurdu rather than scarecurdu and made a slip of brain by calling Who Framed Roger Rabbit, Who Killed Roger Rabbit? (would have been a better film), but what kind of twisted bravado made me attempt Tintern Abbey Clancey when I wasn’t even sure of either answer. A perverse desire for glory.
And yet, even with this Answer Smash Meltdown (I was so good at it the first time I was on, but it continues to befuddle me throughout this week) I won the day and got a Richard Osman faced decanter for my trouble. Hooray! It’s worth watching to the end, I can promise you that.
I have shown my kids myself on TV both days and they have been underwhelmed. My daughter was annoyed that I wasn’t talking back to her, and then said the show was boring and aside from shouting “Daddy!” when he saw me, my two year old son didn’t even realise that it’s a fucking big deal for your dad to be on telly, misremembering the names of old films. I am mainly just a bit sad that I’ve put on a bit of weight since July and so don’t look as good as I do on screen. Real life adds twenty pounds apparently (not quite that much thankfully).
But enough of my performance buzz. This morning I went to watch my daughter in her nativity play, “Away in a Manger” told from the perspective of the donkey whose manger keeps getting usurped. Phoebe played the Stable Girl, which was a better part than it sounds, even though I don’t remember her from any of the gospel accounts. She had two lines and belted out the second one especially well. My favourite bit was whilst they were waiting to start and Jingle Bells was playing and she cheekily started up singing along and got the others to join in. She became slightly more reserved once the thing started up, but eased her way into it and afterwards was full of a very recognisable performance high. She had been the best, of course, but more terrifying she had clearly enjoyed the experience. What have I created?
I fear a Frankingstein with my desire to show off coupled with actual talent and likability. I was terrifically proud of her and ashamed of what I had passed on to her.