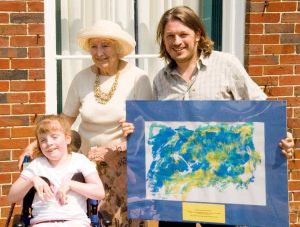 I drove down to Ingfield Manor School today for their summer fete. I first went there in December to see the kids putting on their Christmas shows, and they had kindly invited me back to open the event, along with Dame Vera Lynn, which was rather exciting.
It was proper fete weather, warm and sunny and driving through the countryside there were lots of villages lucky enough to be having celebrations today. Living in London it's easy to forget about rural community life, even though I grew up in a small town, where these events were part of my life.
Amusingly my sat nav chose to show me who is boss again, by leading me down the back way to the school. The road started to gradually decay, turning to a muddy track. I knew I hadn't come down this way the last time I was at the school and was pretty convinced that I was heading for disaster, as my car bumped and grinded against the uneven track, splashing muck all over my undercarriage. I would probably have turned around, but there was nowhere to turn and I was committed to this foolishness now. I just prayed that nothing would be coming the other way, as one of us would have to reverse and I am not good at that at the best of times. There were ditches and trees all around and puddles that looked like they might trap me. Bloody sat navs. Was the voice laughing at me? It was staying preternaturally calm. It must have known.
Just as I was giving up hope of ever getting back to civilisation I saw the manor in the distance and amazingly this tiny lane led to the field where cars were being parked. How it made it on to the sat nav maps I have no idea.
The event itself went very well. I had salmon sandwiches with Dame Vera and her family and the headmaster of the school before it began. She is a very feisty and sharp minded lady with a very firm handshake, which is all the more remarkable now I discover that she was born in 1917. I had to introduce her later, calling her "the original Spice Girl", though of course, the work she did and what she symbolised during the Second World War was much more important than that.
The people from SCOPE told me the various fund raising campaigns that I've started via this website have raised over Â£50,000 in the last four years. I don't take any credit for this, because all that money has come from you. So thank you very much for your incredible generosity. It is amazing to have made that kind of money. Thanks.
Touchingly one of the children at the school, Leanne Holman, presented me with a painting that she had done. Obviously I would have preferred a disabled parking badge, which is what I've been angling for all these years, but in some ways perhaps this picture means more than all the illegally used parking badges in the world. Though it's not going to help me leave my car near to the supermarket is it? So please keep giving money until SCOPE see sense. Another fifty grand and they'll have to surely.
I am joking, of course. Leanne's picture is a wonderful reward and I felt very honoured to receive it.
Then it was time to enjoy the afternoon and spend some money. I played on the tombola and a bowling game and watched some scary morris dancers, dressed in masks and black costumes (they must have been sweating in there), called Mythago. There was a very impressive band called the Trafalgar Allstars, though it was hard for me to enjoy them as it just reminded me of my own reluctant participation at similar fetes when I was in the school brass band. The kids in this band didn't look too miserable, but there must have been at least one Richard Herring amongst them who was a bit rubbish at playing his instrument, didn't want to be there and just held their trumpet (or whatever) to their lips during the hard bits but didn't blow.
I had fun, even if that one band member didn't, but soon I had to head back to London for another preview. The sat nav told me to turn right up the muddy track. I laughed and turned left. I may be a slave to this machine, but I am not a total idiot.