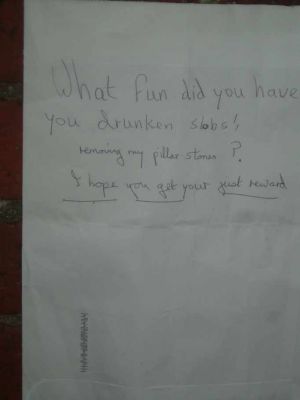 I had had to get the train to Swansea, which I thought would mean staying overnight in this wonderful seaside resort. I had booked another very cheap room over the phone this morning. The man only took my name and no other information and when I told him that I might not be in til midnight he told me that he would place my key behind the flower-pot at the front.
It had been a busy afternoon, but I was lucky enough to arrive at the station just as a train was about to leave. So I was in Swansea by 8 (even though the driver reported that we had hit an animal en route and had had to stop for a while to clear away the broken bits of train and presumably blood and carcass etc) and popped down to the hotel to drop off my stuff.
Even though it was early the only member of staff there was the cleaner and my keys were already behind the plant pot. I was expected to pay no deposit and went up to my room. It was probably slightly nicer than the one in Lincoln and was en-suite, although this was rather a posh term for there actually being a toilet in the same room as the bed. It was admittedly in an alcove, but there was no door to hide it awy from sight or smell. You know, a bit like in a prison cell.
I didn't care too much. I would only be sleeping there for a few hours, provided no-one was snoring nearby or I became afeared of strange men trying to get into my room and touch my bottom.
I left my bag and headed down to the gig.
When I got there I found out that Simon, the other act on, was driving home to London tonight. I had not known about this. If I had I clearly wouldn't have booked the room. He kindly offered to wait for me to finish my act and give me a lift. It would mean missing sleeping in the bathroom with a bed in it, but I thought I'd take that chance.
But now I worried about a) how I would pay the hotel for the room I hadn't used and b) if I should pay the hotel for the room I hadn't used and c) whether it would be acceptable to give 10 pounds less because I hadn't soiled the room in anyway or had breakfast.
I decided to be honest this time, unlike on this occasion. I had been told this morning there was only one room left and the manager could probably have given it to someone else and it didn't seem fair that he should be out of pocket because of my good fortune.
See sometimes I do the right thing.
There would probably be no-one there to take my money, but I thought if I left the money on my bed and put the keys downstairs with a note, then hopefully all should be OK. Unless one of the other guests found the note and decided to help themselves to the money and use my toilet. Then I would look like I'd run off withoug paying.
Not that they'd be able to find me. They had no details, although the cleaner had given me directions to the University, so I guess if they wanted to invest some detective time on the problem they might have been able to track me down.
The cleaner was still there when I got back. I told her of my quandary and she didn't know what to do. She said it didn't seem fair to charge me, but I insisted that it was. In any case, it wasn't her call. She didn't own the hotel. "You could have just left without saying anything," she said, incredulous at my lack of guile, probably pitying me for my stupid honesty (you can't win in this world my friends).
I offered to give her the money, but was aware that she could easily claim I had done a runner and pocket the cash herself. To be honest, I kind of hoped she would. I felt the actual owner was not exactly taking his job very seriously, with his not being in his own hotel and that it seemed wrong that he should be given my money when his cleaner had to deal with things.
But then, if she stole the money and they tracked me down, it would be me going to prison, so I asked for a receipt.
In some ways I was happy to pay £30 to not sleep in that toilet/room.
I had been honest and good and if some people are to be believed that would mean that good karma would come back to me.
The gig went great. I got the tone and the level of frustration and anger exactly right and the audience seemed to really go for everything. It is a very fine balance to get this right all the way through and one's mood before the gig can certainly send things a different way. I misjudged it a bit in Lincoln - yet that produced interesting stuff in itself - but tonight it seemed to come out right. I don't think anyone walked out. They really seemed to understand where I was coming from even when I talked about dead baby pies.
Maybe this was repayment for my honesty. But what if the hotel manager spends the thirty pounds on baby pies? Where does that leave me morally?

On the way back to the gig I had noticed this piece of A4 paper (actually the back of an envelope), stuck with sellotape to the front gate post of one of the houses I passed. It said "What fun did you have you drunken slobs, removing my pillar stones?
I hope you get your just reward"
I couldn't really see where the pillar stones were meant to be - they seemed to be there - but possibly they had been replaced. But I liked this little poem to the world in general. This little bubble of frustration at the stupidity and thoughtlessness of others. I am sure the drunken yobs will probably never see this missive, nor care about it if they do, but I've slightly increased the chances by putting it up on here. And maybe some people who stole someone else's pillar stones will have pause for thought at the words of pain and seek to rectify the consequences of their crime.
It is a little cry for help or vengeance in an unfair world. If karma is true then those pillar stone thieves will be being punished (possibly by being forced to do a stand up gig to all of the most stupid and humourless people in Lincoln - and none of the nice ones- after being getting poor service from a VW garage receptionist).
Before blogs there were only bits of paper sellotaped to gateposts. Now there are a million such missives floating in the ether and they have about as much effect and only make the people who write them look mental.
I like the way he/she has underlined nearly every word in the final sentence. I like trying to imagine how you would say this aloud, whilst emphasising everything but the "your".
Try to play nicely children.