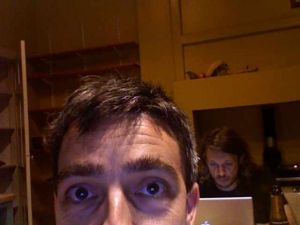 Happy Birthday TK Herring. Once again the pressures of the Fringe meant I forgot to send a card. Even though I am talking about you every night on stage. It's all very well that I am welling up with emotion at the end of my show, but my failure to even send a card shows that that is all a showbiz facade!
Andrew Collings has arrived in Edinburgh for our "live" podcast tomorrow morning. The free tickets are going fast, but there should probably be a few left if you happen to read this early in the morning and can get to the Underbelly by 10.30am. It should be fun. If you think it is fun to watch two bleary eyed men talking about the news into an apple mac computer. And I think you do think that that is fun.
I met Andrew at the station and then brought him back to my flat. He didn't really take the hint when I told him I was going to have a little lie down before the gig. Nor when I cooked him fish cakes, topless. I argued I didn't want to get my show shirt messed up with spitting grease. But really I hoped that there would be all kinds of spitting grease going over me, once he's seen my toned physique. He didn't though. He just ate his fish cakes and said that they were nice.
Then he came to see the show. I was back in form and in a good mood and it was a lovely show. The place was probably about two thirds full, which is a great result for Black Tuesday, where the offers stop and the tickets are up to the proper price. It might be the first show where the audience figures are actually better than last year's. Word seems to be getting around. The buzz is good. It is excellent to get reviewed early on (if the reviews are good) and it will take some serious work from my enemies to dent the growing rep of this show. Though Gilly has given it a go on the edfringe website (which few people are visiting as you can't buy tickets there) so in the interest of balance here are her comments - "Rubbish, rubbish, crap and more rubbish. Herring is totally charmless and for a performer who has been around for a while his delivery was poor. The worst show I have seen in a long while."
I don't know how many shows you see, Gilly (and I secretly suspect that you haven't seen mine), but you should really get out more. There are loads that are way worse than this one, I promise you.
The older I get the more I love the people who hunt you down to slag you off on the internet. I won't be publishing any more of their reviews, but do know that I read them all and they make me laugh, as well as thank God that I am not that petty a person. And I am quite petty.
Collings and me had a drink with a couple of people from the audience and met a man who was on his own, waiting to see a magic show, who had travelled the world working in casinos. We got to know a lot about his life in the 20 minutes we talked to him. It was an interesting story. Probably as good as many of the shows on at the Fringe. He had had a voodoo curse put on him in Gambia. It hadn't worked though. Unless he had been cursed to sit in the Underbelly beer garden forever talking to English people. Maybe that is the worst curse for a Scotch man.
We then headed down to Bar Napoli for some pasta and I bumped into Christopher Richardson who used to run the Pleasance. He seemed in good spirits, though lightly chastised me for jumping ship to the Underbelly. He's another of the great Edinburgh characters and has done so much to shape the modern day Fringe. Rather like a headmaster he is held in great affection by the many comics who have passed through his courtyard.
Then we went for one more beer, before retiring to our flat for an early night so the podcast would be as sharp as possibly. The photo was taken by Andrew. It is of me writing this blog, possibly the most solipsistic thing that has appeared on these pages. He has gone to bed now. I think he probably wants me to follow him to his room and bum him. I am going to give it a go. If we don't turn up for the podcast it means that it either went really badly, or really, really well.
Tomorrow is going to be a long, full, exhausting day. So better get some sleep.
After the bumming.
It won't take long.