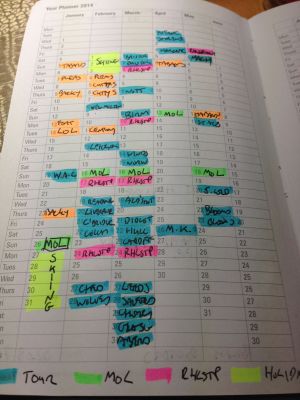 The first gig of the year, as my wife and I tried out some new material at the Tabard. It's close enough to walk, but we were unlucky enough to be caught in a bit of a downpour with icy cold rain cutting into our skin and dampness soaking my shoes. socks and trousers. It wasn't the best of starts, nor did it make us pumped up for the gig. There were no towels at the theatre so I dried myself as best I could with my jumper which I then hung up to dry over the heater. The baby that had poked through a hole in the ceiling on my last visit was now down on the table below. I don't know if it had made its own way down. We weren't safe from the rain inside either as it steadily dripped through the ceiling. I kind of love the way that the backstages of theatres are often so run down and uncomfortable, as I enjoy the juxtraposition with the glamour of the lights and the stage. In my time I've been in dressing rooms that are literally just cupboards or actually somehow colder than it is outside. It helps to keep performers grounded. Yes, they might love you out there, but backstage you are getting rained on, even though you are indoors.  It is worth remembering that the glitz of showbusiness is nothing but an illusion and the UK's theatres seem very keen to hammer home that message.

And I am not dissing the Tabard. It's a great space, tiny and unique and in walking distance of my house (even though it always seems to rain when I walk there) and packs in a varied programme for its audiences. A musical version of "A Christmas Carol" was on before me, and perhaps in this case the actor playing Scrooge genuinely didn't make any money from his performance, making this much better than those Hollywood versions I decried a few days ago. I bet Bill Murray and Michael Caine weren't in a dressing room with babies and rainwater coming through the ceiling, for all their claims of having discovered humility.

I have a lot of work to do on Meaning of Life, not so much on the next episode abiout the Paranormal, which is shaping up OK, but on the remaining four. I made a little colour coded chart of my commitments until May with tour gigs in blue, RHLSTP in pink, MOL in green and previews in Orange (and a week's holiday in yellow - I am going skiing for the first time in my life, which seems to be a dangerous occupation which might get me out of future commitments, fingers crossed). I have five more previews before the next MOL, then four before the next, then none before the fourth in the series, and one each before the fifth and sixth. And February and March are already pretty full. I am planning on covering death and love in shows three and four, which gives me the slight get out clause of using material from two of my tour shows. But I am hoping to have barely any crossover. I am allowing myself to delve a little into material from the 1990s (but usually only if I can add something new to it) and the sketch in show 2 was largely written when I was 19 (and worryingly is going much better than my more recent efforts).

The point is that this is going to be quite a tough few weeks, but I am excited about all the projects. Hopefully they and the skiing won't break me.

Afterwards a man came up to me and said there was something he had to show me on his phone. Because of previous routines I didn't know if this would be a pyramid of Ferrero Rocher, something with a shrek in it or some graphic picture involving cocks. It turned out to be the last one, with a photo that has been circulating (and that I've been sent at least a dozen times already, of course) of a man with two penises. It didn't shock me of course. I have been aware of the diphallactic for some time now. Though until the last few days I hadn't seen such an impressive picture (I believe that usually the second penis is much, much smaller than that - leading me to suspect that this one might not be the real deal). What an odd job it is where people feel that it's OK to come up to me, unsolicited and show me (a stranger) such a thing. But it is OK. Even if the likelihood is that I will be being shown something I have seen before. I thanked the stranger for his strange kindness. To others this night of being soaked with cold water, then forced to speak in front of a room of people and then being shown pictures of unusual genitalia would be some kind of awful torture. To me it's just another day at the office.