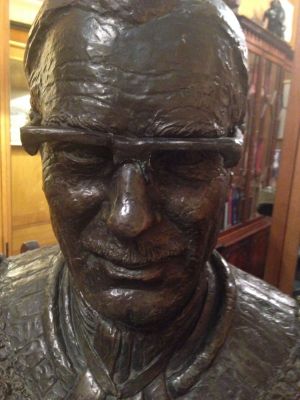 Tonight I hosted an awards event for stockbrokers in Painters' Hall, near Mansion House tube. I find this area of London fascinating as it's filled with history, not least because most of it was burned down in the Great Fire of London. In fact, it is said that Charles II watched the progress of the fire from the Painters' Hall, before having to scarper as the building was consumed in the flames. It was rebuilt, but then destroyed during the Blitz, though they've done a pretty good job of making it look more ancient than that in the rebuild.

The history of the Worshipful Company of Painter-Stainers stretches right back to medieval times, when professions grouped themselves together in guilds in order to protect and regulate their trade. I don't know how many modern day painters are still members of this organisation, but it's amazing to think it still exists and I was excited to get access to one of these guilds.

My dressing room had a sign on the door saying, "The Master's Room" which made me excited on many levels, but mainly let's face it because I was pretending to be in Doctor Who. It was a tiny office (you'd think the Master would expect more - this was smaller on the inside than it seemed from the outside), adorned with paintings and busts of what I am supposing were previous incarnations of the Master (though one of them looked like ex-PM Jim Callaghan so maybe they were politicians too). One of them might be from the future as he was wearing just the frames of is glasses, which put me in mind of Google-glasses. Masonic symbols were dotted around the room too (and when we were students and stayed in a Masonic lodge during the Fringe we did find something that looked very much like a Tardis in the basement). I am pretty sure I've seen someone from the future. If the sculptor couldn't sculpt the glass of the glasses then surely he'd have been better off having his subject take his glasses off.

I sat in this tiny room and worked on my best stockbroking jokes and wrote a bit of my Channel 4 script and ate the same dinner that the people upstairs were enjoying. Jobs like this are odd, but well paid and I calculate that it's worth putting up with some slight disconnection and humiliation in order to help fund "The Meaning of Life". I don't do much stuff like this, but it's interesting to be outside of my comfort zone and take on gigs that are going to be full of people who largely don't know who I am. I don't have a problem with performing for businessmen in their suits and ties (in fact dicky bows and ties tonight), it's just another audience. But notoriously these corporate affairs can be tricky gigs.

I just about got away with it though. I chanced an early joke about my astonishment that this event wasn't televised, as I was sure that the British public would love to see all these money men and women giving each other accolades in the current financial climate. There was no laugh and a sharp intake of breath and a few tuts, which made me laugh at least. I said I was only joking, but was worried I might have lost them. I think part of the problem was that I was calling them investment bankers, which was actually promoting them a little - I admitted by own ignorance of financial affairs and tried a couple of topical remarks about Saatchi and the bloke who has thrown away 4 million pounds worth of Bitcoins. I was getting some laughs,but not from everyone. There was some slightly drunken heckling from a table at the back, but I dealt with it OK and pointed out that I was reading out the winners of the awards and would change the name to one of the companies that was enjoying my stuff.

Once we were on to the awards it was plainer sailing and I managed to be a bit cheeky to some of the winners. So overall it was an OK gig, though I experienced something that hasn't happened for quite a while with a couple of people coming up to me afterwards and saying, "Well I thought you were funny." Others asked if they had been a tough crowd, but whilst it wasn't the best gig of my life, once you've done open spots where you walk onstage to a wall of boos (a noise so strong that it practically takes on physical dimensions) before you've even said a word, then a little bit of dissent and mild apathy is naught but a delight.

I had been shocked and saddened to learn of the death of Lewis Collins, yet part of that shock was down to the fact that in my mind's eye he is still in his twenties and driving cars round corners at unnecessary speed so that the tyres screech. It was as surprising to hear that he was 67 as it was that he was dead. Because we kid ourselves that we aren't getting any older, so when someone we haven't seen for a while suddenly turns up grey-haired or dead then we get a shock.

He is associated with one role that he could never escape from (made all the more annoying as Martin Shaw went on to be a more "serious" actor- if being Judge John Deed counts- and left behind the type-casting). But one person's success is often just up to chance. Collins came close to being cast as James Bond, which had he been a good one or not, would certainly have been what would have been remembered in his obituaries. And as someone pointed out he would have been very much in the Daniel Craig mould had he got it, but he was ahead of his time and they wanted something less gritty.

I watched a few Youtube clips including this slightly sad interview on the Bob Mills Show in which his frustrations are clear, yet he is hopeful of a return to the Professionals (which unless I missed it never happened). I also watched his "This is Your Life". It turns out that Top of the Pops is not the only thing tainted by Operation Yewtree, as Collins' acquaintances turn out to include Freddie Starr and Jimmy Savile, which adds a new and unintended level of horror to proceedings, especially as there a group of "deaf and dumb" kids are brought on to be patronised by Eamonn Andrews and who knows what by Savile. It blights the tribute and the good work that Collins was doing, but it's interesting to see how things have changed in the intervening years, not only because of the "aren't they brave?" attitude towards people with disabilities, but also because in those days it was all right for Collins to kiss the kids on the cheek as they came in. Which in any decent society it should be. But which seems deeply wrong now. Especially when Savile is in the building.

I am not attempting to imply anything here - in fact quite the opposite. It's terrible that the spectral prescence of Savile dirties everything. If he could see the destruction he has wrought in death (on top of the crimes he committed in life) he would be nothing but delighted, I am sure.

I feel sad for Collins partly because I feel sad for myself. We can't believe he has aged because we don't want to believe we have aged and he couldn't escape his past and couldn't even return to it and but for an overly aggressive 5 minute interview he might have been a massive star in the second half of his life. He represents us all, for our success and failure and our refusal to acknowledge that time has passed and we will all die.