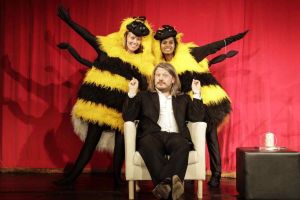 The Leicester Square Theatre Podcasts continue to be a delight. Tonight's guest were the charmingly modest Edgar Wright and the delightfully subversive Mark Thomas. It was one of those nights where the chat in the dressing room before and after was just as entertaining as what was on stage. I think Mark Thomas could probably have carried on telling stories into the early hours of the morning. He threatened to carry on going til all the audience had left, but in the end I was weary from over two and a half hours of podcasting and had to say, "I'm tired, we've got to finish." But two more illuminating and funny and filthy podcasts in the bag.
Edgar's new film, "The World's End" looks amazing and he's even put a Tim from the Office in it, though no a shrek (unless that's one of the secret cameo roles). But I was mainly interested in talking to him about the rivalries between Cheddar and Wells (where he grew up) and whether Cheddar Gorge (where I was once a cave guide) is better than Wookey Hole (where Edgar worked in the car park). Only you can decide who won.
I pitched him some ideas for Spaced series 3, the Goodnight Sweetheart reboot and a way to improve Ben Elton's "We Will Rock You", and he looked keen, but he might have been humouring me. I really liked him. He is still as enthusiastic about what he does as he was when he was a teenager with a camcorder and it's truly impressive (though thoroughly deserved) that he's gone from finding funding for his films from local businessmen to working in Hollywood. I was too busy going off at scatological tangents to really express that thought on the night unfortunately, but I really appreciated him taking time out to do this. He was taking a 90 minute break from putting the final editing touches to his film which has to be handed in tomorrow (I imagine making a film is like doing homework and he has to go into Ian Universal's office and give it to him directly), so it was amazing of him to do this at all. Annoyingly he is another super-successful man who turns out to be down-to-earth and unaffected.
I had had quite an exhausting day and both podcasts were longish ones so I was glad that Mark had so many stories. One he told backstage was of doing a gig in the Leicester Square Theatre, where Harry Shearer from Spinal Tap and the Simpsons and his wife were also on the bill. Harry had been given the number 1 dressing room whilst the other acts were in the slightly smaller (and 1 is not big) rooms 2 and 3. But Mark had needed the toilet and the ones in their dressing room were being used, so before Harry and his wife arrived he took the opportunity to use their loo. Of course, as he was halfway through his business he heard the pair enter their dressing room, unaware that he was there. He was left in a quandary. Should be come out and say hello or just hide away until they left. But also he was now in danger of overhearing all their conversations. He made the decision to come out, much to their surprise. What a wonderful quandary to be in!
It was a busy day with me dashing all over London for various reasons, but I still just had time to get my picture taken with some massive bees (they might have been human actors, I am not sure) in support of Friends of the Earth and their petition to save Britain's bees. Numbers are dwindling and action needs to be taken, so please support this cause if you can.

I have one guest booked for next week's final podcasts of the series, the wonderful Isy Suttie (Sony Award Gold winner and Dobby from Peep Show) Book here. I don't know who the second guest will be yet, but aiming to go out with a bang. Lots of people want to do it and so I am starting to pencil in guests for the autumn already. October 28th looks particularly tasty, but I can't say who it is yet in case he or she can't do it. But it will sell out as soon as it is announced, so might be worth taking a punt now. I've a feeling all of those autumn dates are going to be pretty big acts.