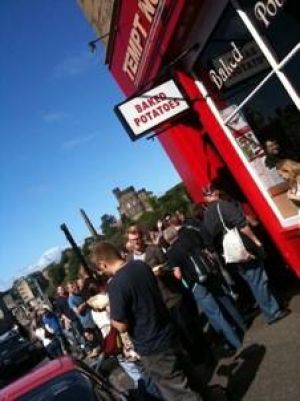 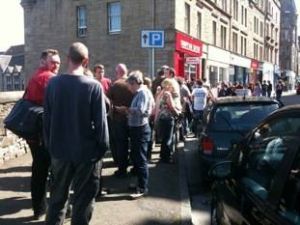 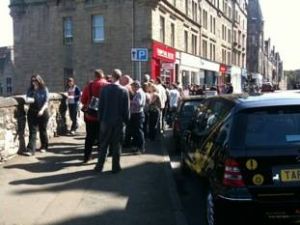 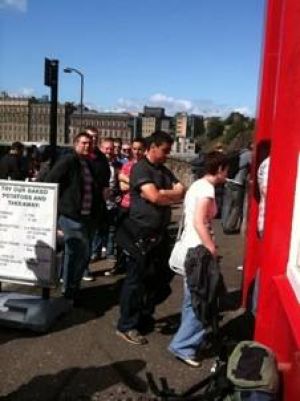 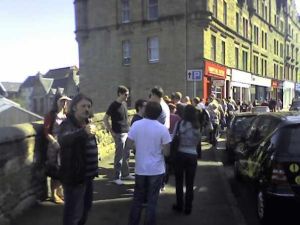 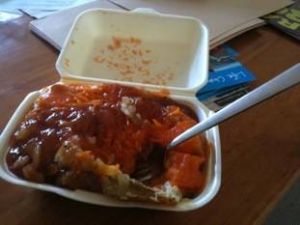 Today a real Edinburgh happening. It worked about as well as I could have hoped. We were attempting to "Break The Tattie", taking as many of our podcast audience as would come for a baked potato, but also encouraging other people in Edinburgh to go to the shop too. Last week the bearded proprietor had told me that he had 100 potatoes on the go at any one time, so I was hoping to get more people than that, with the ultimate aim of making the place run out of spuds and, if possible, also all fillings and drinks as well.
A sizeable army of people followed us down Cowgate after the show, maybe 50 or so, but when we got to the store, with the sun shining and a beautiful blue sky above us, I was astounded to see that the queue was already snaking down Jeffrey St hill. There were dozens of idiots there. Some already had potatoes, but the rest queued patiently and in good humour and an almost carnival atmosphere. It was an awesome and wonderful sight. Cars were stopping in the street and their drivers asking people what they were queuing for. "Potatoes" came the proud and confusing response. I passed a woman in a neighbouring shop standing looking at the event, questioning one of the potato eaters about it, just as she was saying "Richard Herring? Richard Herring?" like someone questioning the existence of Mars Bars. We had confused a street and created a mini whirlwind of madness. I felt oddly proud of myself and delighted by humanity. If you came along I totally love you. What an insane and wonderful thing to do.
Like a captain going down with his ship I felt it would be wrong if I had a potato before everyone else in the line was satiated and so I took position outside to watch the slowly moving queue and the bamboozled reactions of strangers. My grumpy potato serving nemesis came out after about 15 minutes to jokily chastise me and to almost head butt me. He had already run out of potatoes and as I had hoped had not been tipped off about what was going to happen, nor looked at the internet. He looked down the road, having only had the view from inside the shop for now and saw the line disappearing almost over the horizon. "Are you taking the piss?" he asked.
"You told me you had a hundred potaotes," I informed him, "So I needed a hundred people."
"Are there a hundred people here?" he asked with disbelief. I couldn't quite believe it myself. It was going to take him another 15 minutes to cook more potatoes for this mob clamouring for tatties. I worried things might turn nasty. The proprietor was delighted and annoyed in equal measure, aiming a pretend head butt at me at one point.
I was kind enough to tell him that nothing like this would be happening again next week - just in case he got in extra staff or knocked through to the shop next door to make bigger premises for an onslaught that would never come. But it was strangely annoying as well as wonderful. He and his wife were going to have to work hard for over an hour. They'd increase their takings of course, but they'd have to work for it.
I thought people might drift away if they had to wait much longer, but nearly everyone waited in the sunshine, laughing and joking. It was a lot of fun. I felt like Ozymandius King of Kings as people looked upon my wonders and despaired (and I know it's on and not upon, but upon is better - take that Shelley). What had I wrought?
Incredibly there were enough people to make the Tattie run out of potatoes for a second time and so the stragglers and I had to wait an extra 15 minutes for our food. In that time a Spanish family came in and patiently waited to be served, perhaps assuming that it always took this long to get a Tattie.
I spoke to the guy whose life I had ruined/improved and he told me that next year might be his last in business. Hopefully that wasn't as a direct result of this stunt. But he's been serving potatoes for a long time and feels that it might be time to do something else. To my mind there is no nobler profession and it was nice to give something back to the place that has provided me with such succour over the last two decades and which I often ate in feeling miserable, alone and as if I was wasting my time in this stupid job I have chosen. I think they'd have just preferred the cash, but there you go.
You can see what we got up to in all its glory thanks to Johnnydobby who made this secret video (I had no idea he was filming) which captures most of the major incidents, including the lady trying to work out who the Hell I was and the head butt, plus the milling nerds in their Virgilio Anderson T shirts.
In the end I queued for 75 minutes - what kind of service is that? Awful! I took my Richard Herring (hold the Andrew Collings) back home and ate it on the dining table. I felt full of potato, but full of love for the world.
Thanks so much for joining in with the fun if you did.
Now we have to think of something better for next year.