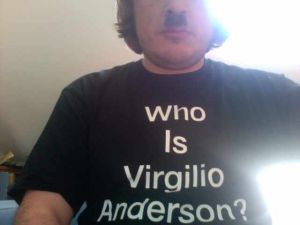 Oh sleep, wondrous sleep. I really caught up on my zzzs last night, finally waking up at 12.30pm. And I felt refreshed and good and happy. I got straight on with finishing off the final draft of "How Not To Grow Up," and then sent it off to my editor. The proof readers may have something to say about it, but I am pretty happy with the way it's turned out. Fingers and toes are crossed that it might do well. We'll have to wait til next year to find out (though it's coming out in the first half of the year, not the second as I previously thought - not sure of the exact release date). Not yet halfway through the year and I've written a book and done a stand up tour. That's not such bad going.
Also, excitingly my Virgilio Anderson T shirts arrived this morning. I designed them on the internet last week - one says, "Who is Virgilio Anderson?" and the other says "I am Virgilio Anderson." I think they could turn out to be the 21st century equivalent of the "I'm With Stupid ->" T shirts. You could buy one of each and go out in them with a friend, especially if it's raining and you want to listen to the rain drops hitting the side walk. Or you could go and see "Ferris Bueller's Day Off" which is Virgilio's favourite film, or so I am informed, though it isn't a drama or a thriller, so must be included in "Other".
I should point out these T shirts are not commercially available. But they could be if anyone showed the slightest interest. To be honest it's pretty easy to make your own. People have been designing Virgilio pictures like this one or this one or this one. My T shirt, as you can see from the picture is very basic in comparison.
I wore the T shirt to my gig in Wimbledon tonight. Even though I have been walking around Shepherd's Bush with a Toothbrush moustache for a total of two weeks now, without comment, the Virgilio T shirt received its first reaction within a minute of me being out of my front door. A man lunged at me from a fast food shop, staring at me. I was thinking he's going to attack me because of the moustache. But instead he just bellowed, "Who is Virgilio Anderson?" I don't know why he was asking me: I clearly don't know. I just shrugged mysteriously. Two women were passing and one said, "Yes, who is he?" to her friend.
"I don't know," she replied, but their curiousity had been tickled for sure. No one cared about the moustache, but everyone was fascinated by this simple question. It is odd what captures the public's attention.
Virgilio, despite his insistence that he doesn't like head games, is maintaining his silence. I am now sure that he will end up having a more successful show business career than me. Please keep spreading the mystery. Write "Who Is Virgilio Anderson?" on your school bags and graffiti it on to walls. Let's not stop until the public are clamouring for Virgilio Anderson and he is brought to our shores and heralded as the god in the Battenburgh house, that he clearly is.