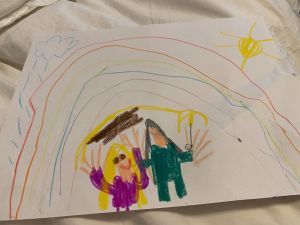 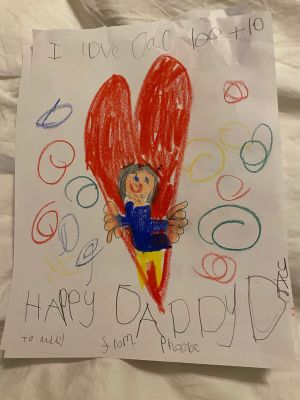 Fathers’ Day and my daughter had got up early to draw me two pictures wishing me a happy day, one of me standing in a heart (my love score having risen to 110 - still s short way off my wife’s infinity lead) and another of me and Phoebe under a rainbow with Freddy Krueger fingers. My captors only have to show me the most occasional kindness for me to be overwhelmed. But man, this makes up for all the tough times both past and future. Can I be a comedian any more if the only approval I crave is from people under my own roof?
Yeah, probably.
Maybe on the heart one I am emerging from a pool of lava still. But even if I am, that’s progress as usually I am falling in. Maybe the next picture will have me being pulled back into the fire by a crocodile.
I may have cried a little bit when I received this, but luckily no one saw, so it will be my secret forever.
We were going back to Woburn Safari park today. In my tiredness I accidentally looked up Whipsnade zoo and put that postcode in the sat nav. It was only because I made the same mistake as I rang my dad from the car to wish his Happy Fathers’ Day that I realised what I’d done. Luckily we were on more or less the right route at that time anyway or we would have had to look at the wrong animals. I wonder how much business these two W named animal based facilities lose to each other. I guess it evens out.
We say a tiger and a wolf having a chat through the fence and lions wandered in front of cars and a monkey jumped on the roof of the car in front of us, rode around on it for ages, got off, came up to our car, passed it and then jumped on the next one. It’s quite something to be shunned by a monkey.
We played I Spy on the way to the park, though Ernie is too young really. We let him play with colours instead of letters but he only lets you have one guess before telling you what he was thinking of and sometimes not even that. His best one was “I spy with my little eye, something beginning with blue steering wheel.”
I got that one. He could at least have said “blue steering whee” to make it harder.
I took Ernie on a dog walk (with the dog, not Ernie on a lead) when we got home and he (Ernie not the dog) cried for most of the 45 minutes after accidentally being knocked over by Wolfie when playing at being the Gingerbread Man (what a surreal world children get to live in). After 15 minutes I’d tried to take his mind off it with some more I Spy. He spoke through his tears, “I spy with my little eye, something beginning with crying.” It was the funniest and most heartbreaking moment perhaps since Peter Baynham told me he was delighted that my grandad was dead.
I received nothing saying I was the best dad in the world on it, so someone else has taken that crown this year. But I will continue to aim for the top in what is the most important role in my life.