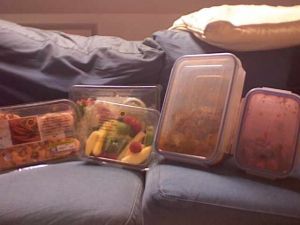 Andy Collings and me are very different people, which is lucky for the dynamic of our improvised double act. Luckily we still like each other despite our differences. The Arabs and Jews could learn a lot from us. Especially given that like me and Collings, Arabs and Jews are actually pretty similar and play up their difference just for effect.
But our differences were given physical form today as we both took our lunches up to my attic to consume after the completion of podcast 39. Andrew had, in his own words, two tupperware containers which were filled with "Andrew's homemade organic chilli with courgettes, artichokes, pepper, coriander, spinach and broccoli; Andrew's homemade organic, wheat-free plum, apple and sultana crumble." Whilst I had some unenvironmentally friendly (damn my carbon skidmark is long and brown again) M and S chilli and coriander king prawns, M and S nutritionally balance super wholefood salad and M and S freshly prepared pineapple, mango, kiwi, raspberry and blueberry fruit salad. We are men of different tastes and ethics. Also I am earning more money than him at the moment. Not that I think he'd eschew his stupid tupperware containers full of organic rubbish were he the richest man in the world. But he would have the finest oat milk available on the market out of cut crystal glass.
Still we were both being pretty healthy, which I really need to be as despite a couple of good weeks of dieting, there have been a couple of drinking and eating too much chocolate and I am over half a stone heavier than I was three months ago (still a stone and a half lighter than I was 12 months ago, but I am aware of how quickly I can slip back down the lardy slope of greed).
I don't think the podcast was a particularly good one, but then again I think it's good that the quality is variable in a way - we are making it up as we go along, we're not editing it to make ourselves seem funnier than we are, we're just seeing what comes out of our stupid mouths, given that we know what will be going into our stupid mouths the minute we've finished. That's right, each other's cocks.
No, not really, I mean homemade organic chilli with courgettes, artichokes, pepper, coriander, spinach and broccoli and homemade organic, wheat-free plum, apple and sultana crumble and M and S chilli and coriander king prawns, M and S nutritionally balance super wholefood salad and M and S freshly prepared pineapple, mango, kiwi, raspberry and blueberry fruit salad, respectively. And then each other's cocks. It's important not to consume sperm on an empty stomach. Or it can impregnate you. Even if you're a man.
There was still a genuinely great bit, where the cash strapped Collings found out on air how much more I made than him for appearing on "What the Dickings". I hope you can hear in audio how crushed he was. He had tears in his eyes. I am literally worth twice as much as him to Sky Arts, though he gets almost twice as much as me for writing for the Reader's Digest, which we've both contributed to recently. In the kingdom of Sky Arts the M and S food eating man is king. But in the kingdom of Reader's Digest the man who believes that water is capable of remembering things is deputy prime minister.
I also enjoyed commenting on the fact that one of the men on the BNP website (I won't link to it, as I know a lot of susceptible, mentally fragile and borderline psychotic people read this website - thanks for the emails and messages - and don't want their names and addresses to end up on a list. Well not another list. They're already on a list which will be given to the police in the event of my murder) looks like he has cut the skin off Enoch Powell's face and pulled it over his own face like a kind of mask. Which I wouldn't put past the kind of twat who would be in the top five most important people in the BNP. It's incredible from today's newspaper coverage of the leaking of the names of BNP members how many people joined the party "by accident" or in the name of research. Further evidence that you have to be pretty fucking stupid to have anything to do with this bunch of oleaginous, thin-lipped, corpulent, immigrant hating descendants of immigrants (pretty much everyone in this wonderful melting pot of a country will have many, many immigrants amongst their ancestors, you deluded wankstains). I hope you will all join up. Especially those of you who seem incapable of understanding irony. It would be doubly ironic if you joined.
And talking of the BNP, a previous routine about them has led to me being quoted in an academic paper about comedy, which you can download here, though in another irony I did, of course script edit the third series of Little Britain, not that I had any real input, or any power to stop them doing anything. But glad to have come to the attention of academics. In fact, unless it was an imposter (which in some ways would be even more impressive) the wonderful Mary Beard (who also has a very entertaining blog) left a message on my guest book to say she was glad I was enjoying her Pompeii book (which I am still greatly enjoying).
Academics, mentals and racists. All are welcome here.
I went to the gym this evening. The rot stops here!