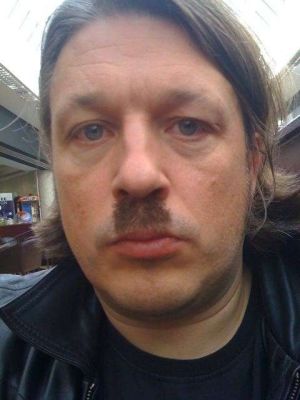 By the magic of the Eurostar and it's peculiar ability to travel backwards in time as it comes from Europe to the UK, I was back in London by 10.30am, having drunk a complimentary glass of champagne already. That is early drinking even by my standards. It almost qualifies as last night's drinking in fact.
There were no slugs in my kitchen as I feared, but over the weekend whilst I had not had internet access Facebook had allowed users to put their names in their IP address and someone had nicked richardherring. Another Richard Herring perhaps or some crazy and annoying Richard Herring fan. It didn't seem like it. The man who had chosen richardherring was from Macedonia and called Virgilio Anderson. Why had he chosen my name, when he had such a cool one of his own? And why was his house so poorly decorated? I was a bit annoyed about this, but it's not the end of the world. Instead I chose the address http://www.facebook.com/realrichardherring which will do me just fine, though a couple of people later suggested that I should have chosen http://www.facebook.com/virgilioanderson, though as you'll see Paul Sheppard has beaten me to that. I had tried to do it and even set up a new account in order to do so, but facebook won't let new users choose addresses yet, probably for very good reason by the looks of things.
Anyway that's created a strange chain of events, but I have still message Virgilio Anderson (the real one, not Paul Sheppard) to ask why he chose my name for his facebook page. He has not responded yet. I would suggest that you all go there and befriend him, though suspect that might be why he has done this in the first place. Though why choose my name? Surely there would many better and more popular figures out there whose identity was up for grabs. I suspect he has some completely different and unconnected reason for choosing that name. But I would love to know what it is. I will keep you informed. In the mean time he has stolen my name (even if not on purpose) so I will steal his and as there is a bit of a feeling of Spartacus about this whole thing perhaps I should start selling T shirts saying "I'm Virgilio Anderson." If there's enough interest I will look into doing it. It would be good if we could turn Virgilio Anderson into a kind of massive cult public figure. Then Paul Sheppard, to a lesser extent could become a minor cult public figure as the guy with the facebook page with the name Virgilio Anderson. I am sure someone will trump him though and change his name to Virgilio Anderson and thus cash in on all the fame. All sorts of questions will need to be answered. "When is Virgilio Anderson going to paint the rest of his house?' "What is in Virgilio Anderson's backpack?"
I would never condone vandalism, but these are questions that some graffiti artist might like to pose on the walls and buildings of Great Britain. And we should only be satisfied when the real Virgilio Anderson (not Paul Sheppard) is interviewed on a UK chat show. I suspect that the name Virgilio Anderson might now crop up in a sitcom or book at least. Is this what Virgilio Anderson wanted? Does Virgilio Anderson google himself? Because I am guessing that pretty soon this page will come top of the Virgilio Anderson search. At the moment Google just rather aptly asks "Who is Virgilio Anderson?"
Does Virgilio Anderson have a wikipedia page? Not yet he doesn't. I think such a man of mystery deserves one. Not one with made up facts, but one that includes all the details that are so far known about the man. It's not the kind of childish thing that I would do though.

Anyway I didn't want to write about that. Having decided not to offend the people of Belgium or embarrass my girlfriend on a romantic weekend I waited til this afternoon for my second public attempt at the Toothbrush Moustache.
It would be the first time I would take the fashion out of London as I was driving to Cambridge for another preview.
I stopped at a service station on the M11 and maybe it's the shortness of my hair or the thickness of the tache or just the fact that I wasn't in London any more where people are not surprised by anything, but I definitely got a few suspicious looks. I bought a sandwich and a coffee and the woman serving seemed unusually helpful, offering to bring both my drink and my sandwich to my table. Was this the power of the tache? Or was she just scared something might kick off if this idiot did not get his way?
The first time I did this I felt sick and nervous and ironically perhaps got some insight into how people in minorities might feel being constantly judged by their appearance and constantly nervously worrying about what might happen to them. This time I felt some of the power of making this audacious facial statement. I don't intimidate usually and don't draw attention to myself in real life, but this moustache is such a statement that people seem to be assuming I am mad or bad or both and are giving me a wide berth and not wanting to rock the boat. It is odd to have this not entirely welcome power and things may change when I come up against some idiot who is equally brazen or who thinks he will show me who is boss or is brave enough to take exception. I may be imagining it, but I think people might think that anyone stupid or brazen enough to have this moustache is probably crazy and hard enough to cause some trouble and so they give me a respect and a deference that I do not deserve. It was kind of weird to realise this today.
The preview went all right. Really extremely good given it's only the fourth one, but my standards are constantly rising and I a disappointed now even if improvise material does not hit the mark. I managed to do a gabbling 50 minutes or so and then did a bit of old material to reward the audience for their patience, but most of the remarks afterwards were positive.
There are so many interesting issues to discuss and whilst at the moment some of them are lacking the necessary element of also being amusing, I feel pretty confident that that will come with time.
A couple of unusual things happened on the way there and back which made me wonder if the moustache is having some effect. On the way through Kings Cross an old guy threw a half full can of drink into the road in front of my car. It seemed unlikely that he'd seen me or that this was a response to my fashion statement, but then again I have never seen anyone dispose of a can in that way - by throwing it into traffic rather than a bin or the gutter - it landed some way in front of my car, but it was a little unsettling.
On the way back I filled my car up with petrol whilst talking on my phone with my girlfriend. I am aware that you're not really supposed to do this as it can supposedly blow up the petrol station, but there were no signs about it and I don't think that has ever really happened and people have their phones on in the garage all the time. As I walked in to pay the man at the till used a microphone to tell me that I should not be using my phone. It seemed a bit late as I had had it there all the time and I was just about to leave the forecourt anyway. I got inside and apologised and asked if I could use it inside the shop itself and he said that that was OK. But as I'd been seconds away from being in the shop when he stopped me it seemed a bit unnecessarily pedantic. Like he was a little Hitler enjoying his power. Or maybe trying to take me down a peg or two because of what was on my face. Who knows?