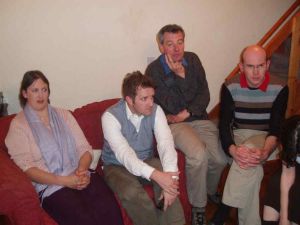 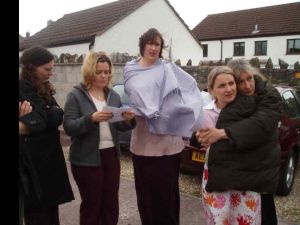 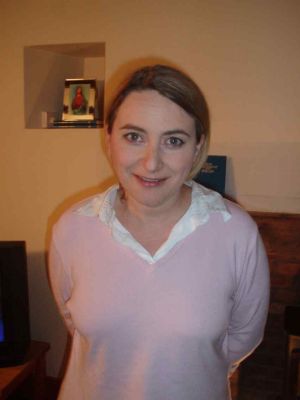 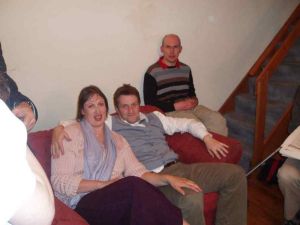 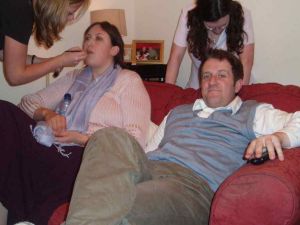 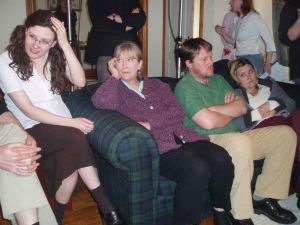 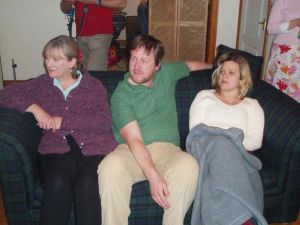 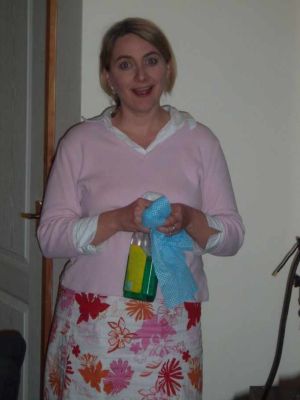 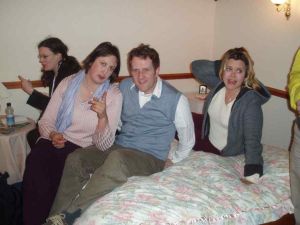 It was the first day of filming for Ā“A Very British CultĀ”, the pilot/short film that I was prepared to travel to Weston-Super-Mare to be in. I arrived here at 1.30am and went to the wrong hotel. The man I woke up was very courteous as he told me that I was probably meant to be up the road a bit.
My alarm went off at 6.15. I had forgotten how inconvenient and annoying filming is. ItĀ’s a long time since IĀ’ve really done any!
There were a few people I'd worked with before amongst the cast at breakfast, such as mawkish Emma Kennedy, but others who I hadn't met, including Jim Barclay from off of The Young Ones ("That's white man's electricity you're burning") and Jossy's Giants. Most of them had arrived the previous evening and had a night out in the entertainment capital of the world. There were already in-jokes that I was not in on. Emma Kennedy had as usual spread like a virus through the group. But quite a nice virus. That generally makes you laugh.
The film is about a rubbish cult of which my character is the leader. They are all threatening to rebel and go and join a rival cult that seems to know when Jesus is returning and which has a glossy TV advert which makes their own cult look about as shit as it is.
It was a long day of filming in doors and I was tired and I'd forgotten how gruelling filming is. I had been a bit worried about not having learnt my lines, but there was plenty of opportunity to go over them whilst we waited for the shots to be set up. Though I did have problems remembering the character names of the members of the cult.
I am always excited to chat with comedians who figured in my childhood comedy fan-dom and was glad to find out that Jim Barclay was an affable and approachable fellow happy to talk about his past work. He rather trumped me by quoting stuff from TMWRNJ, which his son had been a big fan of and I wasn't confident enough to come back at him with the electricity burning quote, in case that was said by Steve Frost or someone. But I should have gone with my gut, because it did turn out I was right.
I tried to catch up on sleep a couple of times, but with little success as we were in a tiny house with about twenty people clumping around in it.
The script was funny and the performances were good and though I suffered my usual anxiety of wondering if I was acting OK, or whether I would watch it and wince at my amateur face-pulling, I think I did OK. It was nice to have Kennedy there as a kind of security blanket, though naturally we spent the whole day saying unspeakably horrible things to each other and attempting to undermine the other's confidence. Which made me think I was probably doing OK, because if I had really been rubbish, Emma would have been embarrassed and kept her mouth shut. I am sure she felt the same about my comments. Wrongly as it turns out. She was really really crap.
Filming is really quite tedious, mainly as you have to keep doing the same thing again and again in a very short period of time. There are loads of things that can go wrong and ruin a take (mainly me not remembering my lines) and then you have to do the same thing again, but from a different angle (you actually remain at the same angle, but the camera changes place - they do not make several different versions for use by people who keep their TVs on a slope).
Maybe Emma can remember some hilarious and illuminating stories, (Check her useless website to find out what she has to say about me) but the day passed in a bit of a blur for me. I ate too many crisps (the other bane of filming is the amount of crap you end up eating) and tried to avoid breathing in the farts of one of the most flatulent group of actors that I have ever worked with.
We headed back to the Timbertop Aparthotel (which I think was a hotel of apartments, rather than a hotel that still operated under the old system of Apartheid. Having said that, the hotel consisted of two houses next door to each other and there were no black people staying in ours, so maybe it was. If so I cannot condone their policy, however friendly the staff and delicious the breakfast may have been) and though I should have gone to bed, we stayed up watching telly and eating pizza and drinking red wine. After a day working under these conditions with a perfect stranger you can feel like you've been friends for years.
I managed to get to bed around about 10.30, conscious that my call for the next morning was 5.45am. Who'd be an actor? It's the hardest job in the world. Sitting round, eating crisps and farting whilst listening to Emma Kennedy singing stupid songs. No-one has as hard a job as me.

Ā“I have been asked by Timbertop Aparthotel to make it clear that the name of their business has nothing to do with segregation at all- it is just the word apartment and hotel joined together. I realise that this is probably apparent to most of you and that my comments are intended as a stupid joke, but Timbertop get a lot of international clientele who might not appreciate my pathetic humour, so I want to make it clear that the Timbertop Aparthotel does not segregate people by race or attractiveness. It is a charming hotel with a friendly staff and it does a great breakfast. If you are every unlucky enough to be forced to spend any time in Weston-Super-Mare then I would heartily recommend this hotel. Staying there is in my opinion the most pleasurable thing you can do in this unusual seaside town.Ā”