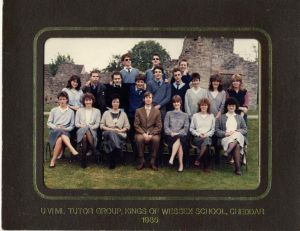 So it goes on. I was a little Pirandello even then, quite clearly. But at least you finally know what sex you are.

Oh and I liked this bit from an old exercise book summing up my four years at middle school:
"There were some embarising moments though when I wished I hadn't opened my big mouth. Like when Mr Gosling came into our drama lesson and said, "Is there an old bag in here?" Then I piped up and said "Yes, Mrs Haxell!"" (our drama teacher)"Of course I apologised."
Interestingly I note that my English teacher, Mrs Harris-Bryant has put a tick by this joke, so presumably she concurred with the sentiment.
I was a naughty, cheeky boy.