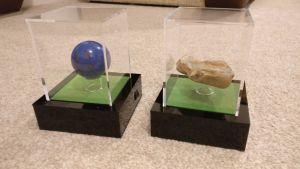 Hard to know if my one accidental beer had given me a hangover or it was just down to lack of sleep from dealing with my son’s vomit, but I thought today was going to be tough.
To begin with I had to head to the field to do my clearing, but also to pick up 60 extra stones, as apparently I had not done enough on my original cursed harvesting. 60 stones turn out to be quite heavy.
I was delighted to see that people have started receiving their rewards from the last but one kickstarter and the boxed balls and stones do look wonderful. We’ve had a delivery problem as only 10 of the 11 boxes of display cases have turned up from China so a few of you will have to wait a little bit longer for yours, but we will do our best to locate the lost cargo or find replacements.
I then had to load my snooker board into the car (managing to trap my little finger underneath it,( though it didn’t hurt til later because it was so cold outside- but is it a coincidence that this happened after I had taken stones from the field?) and then drive to London, first for the read through of the four out of six scripts that I’ve written in time.
It was good to see the cast again (three couldn’t make it, but we had some excellent stand-ins) and they all seemed happy to be back in the saddle and delighted to hear that the first two series of Relativity are being repeated on Thursdays nights on Radio 4 at 11pm from the 19th December.
And the read through went better than I could have hoped, certainly a month ago. The first two episodes are pretty close to being ready and it became apparent what was needed to help the other two along. But there were plenty of laughs and surprises and it was about 500% better than the read through we did for series 2. I have two full weeks before Christmas to crack on with the next two, plus nearly three weeks of January to iron out all the creases. I have LOADS of time! How could I ever have doubted myself. Might have to leave it til January 17th to give myself the necessary sense of urgency.
Then I headed across to the Cockpit Theatre for the exciting sports event of the year, Me1 Vs Me2 Snooker and the 2019 Chris Evans (not that one) Trophy.
We needed to sell about 80 tickets to break even, but in the end about 65 people turned up. Which is still remarkable if you think about it. Given what they were coming to see. Some people had come from Norwich to be here, but you have to remember, there is very little to do in Norwich.
I gave Chris Evans a bag of stones, feeling the need to try and explain myself to the tech guy at the theatre. But given that I was already in his theatre to play myself at snooker, I guess it was too late to make much sense of it all. Am I mad? Or are the people who came to see this event (and who paid for a stone to be delivered to their house) the real crazy ones? Or are all the people who did neither of those things the mad ones?
Wait, no it’s everyone but the last lot.
The new snooker board is lovely, if very heavy and not a good thing to drop on your finger. And the tournament was weird but kind of wonderful. Some of the audience were very invested in the result and there was some genuine tension in the air as we approached the denouement. But I can’t give away the result. Only the people who were there or who joined in the last but one Kickstarter or who are monthly badgers will ever know what happened. Become a monthly badger for this and loads more bonus content (we’re going to add lots more extras soon) http://gofasterstripe.com/badges
I was delighted to get through the day without collapsing or vomiting and now I just have the Hull RHLSTP (and possibly one other little gig) and my Relativity writing to do in what remains of this awful decade. A weight seems to have lifted.
RHLSTP 237 with Annabel Giles is now up on audio
And video
A bonus one coming to you on Friday.
And if you missed the kickstarter you can get your hands on a pack of RHLSTP Trumps.
The regular set is here.
The golden set (limited availability) is here
All the money raised will go towards making more podcasts.
What an honour to make this Guardian list of top 10 comedy books with the Fist of Fun annual. We really did work unnecessarily hard to make that value for money and I am not sure we sold many copies, so it’s very nice to see it getting a little nod, all these years on
If you get the notion, you can vote for RHLSTP in the Pod Bible awards (and Drunk Women too if you fancy it)