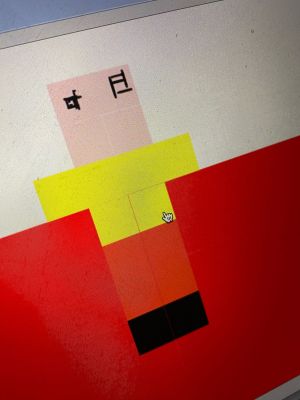 6632/19552
My turn to homeschool my daughter this morning and it did not go well. I am lucky enough to have a spare (old) laptop and a printer, so I am streets ahead of many parents in preparedness, but the website the school uses is so confusing and sprawling. Work is set in one place and the resources are somewhere else and then you seem to upload it in a third location. We were supposed to do something with Cuisenaire rods, which we could apparently print out, but not only do I not know what Cuisenaire rods are, I couldn't find the print out, unless the really fucking tiny ones in the bit where work was set were meant to be the ones we used.
Not that any of this really mattered as my daughter was not in the mood to do anything. She had to write out five questions she'd like to ask a frog full of water from an Aborigine myth, but she did not want to get on board. "I can't do it," she protested.
I knew that she could and told her the questions could be anything she wanted like "What's it like being a frog?" or "Which is your favourite animal?"
But she didn't want to write down mine. And instead made another picture of me falling into lava, but this time using a Minecraft style programme on the computer. Could I hand that in instead? Probably not as it wasn't really clear how to hand anything in.
She told me that I was a terrible teacher and I told her she just had to write 5 questions and then we could move on and have some fun. It reminded me of my dad trying to teach me to drive in the little loop of road inside our school. I got frustrated with him, he got frustrated with me - I didn't learn to drive. And then I reminded myself of Peter Dibdin. "I can't do this," "Why not? Just do it." "You can't even write five questions to an imaginary frog!"
Finally she did this and I think I sent it off and though it felt like we'd done four hours by now, it had only taken 35 minutes (7 minutes a question on average). So we did some none-rod based maths work, but even though Phoebe was more engaged with this there didn't seem to be any way to save the work, so I took photos of the 6 pages and tried to upload them elsewhere, but the site would only let you upload one piece of work. So I had to find the teacher's email and email it all to her (she got back a few hours later saying well done - I think to Phoebe - none of this is the teacher's fault and they continue to do amazing work and remain cheerful in this chaotic time, unlike me and I only have to deal with one of the little idiots).
We'd done 70 minutes on two things and my daughter said I was the baddest dad in the world (and not in the positive definition of baddest). We had a little break and played Homescapes together (which is the one thing that unites us) and then it was time for hte 30 minute zoom lesson with the whole class. Phoebe was attentive and keen and the teacher did an amazing job of shepherding and involving the kids and they all did their tasks with huge enthusiasm. No one was drawn falling into lava. How was it that the teacher was so much better than me? I suppose it's like me getting furious with my dad about my own inability to drive and annoyed with him for having the audacity to try and tell me. My dad was a teacher and a great one too, but sometimes we don't want to learn from our parents.
I joked on Twitter about homeschooling being the worst thing in the world. Obviously most people understood that I don't really think that and that I was venting at the awful situation we find ourselves in. Others helpfully felt the need to tell me some of the things that were worse because Twitter is full of twats who are worse than Hitler who don't understand that it's sometimes funny to make out something is more terrible than it is.
Others told me that I was complaining about having to care about my own kids and that I should have thought about this before I had them. But I am happy to take care of them, that wasn't what I'd it would have taken some kind of fore-knowledge back in 2013, whilst making love with my wife to consider the possibility that in 6 or 7 years time there would be a global pandemic that might mean the schools shut so I'd have to suddenly learn to be a teacher whilst also trying to do all the other stuff to keep the family going and then stopped what I was doing and said, "No."
Like everyone else in better and worse situations than myself I will do my best to cope. And like all people with a sense of perspective I will be knowing how lucky I am and appreciative of all that our amazing teachers do for us.
But if you have kids now, then don't come complaining when child eating aliens descend on the planet in 2026 and trap them in webs. You should have thought about that before you mixed your gametes up in that fleshy cauldron (or should it be a pestle and mortar?).
I guess actually falling into lava might be worse. But then at least home schooling would be over for me.
Good luck with whatever you're dealing with everyone. Please do tweet me if what you're dealing with is worse, so I can find the person who is having the absolute worst time and then RT to all the other people to tell them to stop complaining because they have it comparatively easy.