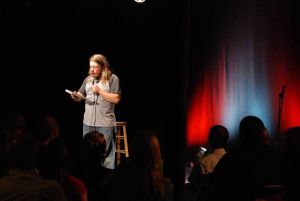 An emotional finale for the Headmaster's Son at the Tobacco Factory in Bristol tonight. I was recording the DVD for Go Faster Stripe (hopefully it will be available in time for Christmas). In the summer heat the room was like a sauna, but it was packed full and the crowd were enthusiastic despite the difficult conditions and it was certainly my best DVD record yet. Hopefully it will come across on screen as well as it did on the sweaty night.
Much as I love the Chapter Arts Centre in Cardiff, it was terrific to do the last performance of this show in Bristol, so close to where all the events took place a quarter of a century ago. It's been a great show to perform and had so much positive feedback, that I was a little sad to be leaving it behind. There's always a chance it might be revived at some point, but as of Thursday I will be doing my new show (even though I have only three jokes and no script as yet, with little opportunity to write anything by then - I'd wait a bit to come and see it if I was you, unless you enjoy watching me struggle and looking embarrassed) and it's rare that I go back to these things (I am hoping to do Christ on a Bike and Talking Cock again at some point, but mainly so I can get them on DVD). All I know is that it's going to be a tough show to top. But I always feel like this at this time of year, when the last show has been honed to perfection and the new show is just a jumble of half thought out ideas. But it's a relief to tick the show off my to do list. I am now just one chapter away from finishing the 2nd draft of the book, and whilst there may be some re-writes after that, I now have the next seven weeks to knock the new show into shape. Each completed task is a weight off my shoulder and I don't feel too knackered despite all the hard work. I can rest when I'm dead, anyway.
A change is as good as a rest and having the occasional day doing something different is actually probably quite a good thing, as it can get a bit claustrophobic stuck in the house writing all the time.
I really enjoyed the drive through the sunshine, listening to some remarkable 95 year old veterans from the Spanish Civil War talking about their experiences. And remarkably I got quite a bit done on my book today, both before I set out and then in the dressing room beforehand, when I should perhaps have been running through the show to check I remembered it. I was typing away ten minutes before the show.
I had tried to run some of the lines, but found it too boring and got distracted and magically enough the whole thing seems to be burned into my memory. If I thought about what was coming next while I was on stage it would make me panic a bit, because I had little to no idea, but it just came pouring out of my mouth and I got it about 98% correct, and still managed to mess around and have some fun with it too.
In the last DVD, due to an accident in editing, there is a point where it cuts from me on stage to an audience shot, where you see me sitting there, chuckling at my own wit. I had been in the audience for Tony Law's show that was recorded the same night as mine, and the editor had needed a reaction shot and just coincidentally chosen one with me in it, without realising. It's quite a spooky coincidence, especially given the fact that (I believe) I am talking about the concept of all the other potential mes that there might have been if a different sperm had made it to the egg first.
Just before we went on Chris from GFS and me were talking about this and I came up with the idea of now deliberately putting a shot of me laughing at myself in every DVD I record, so one of the first things we did was record me, sitting next to the 16 year old Welsh boy in the front row, laughing like whatever I'd just said was the funniest thing ever.
So that's a little extra to look out for on the DVD.
Thanks to all those of you who came last night and made it such a memorable show, and to all those of you who came to see it over the last year. Even though I loved Christ on a Bike, I think The Headmaster's Son might just edge it as my favourite show ever.
Surely I can't top it with a show about Hitler's Moustache. Can I?