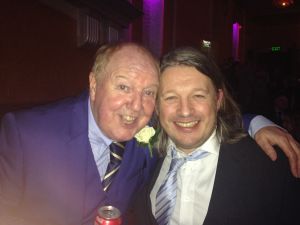 It's my 46 and a halfth birthday. One year to being three quarter of the way through my forties. Only three years from work commencing on "Oh Frig, I'm 50!"

We took the train up to Manchester for a wedding today. We arrived at the hotel in good time and planned to walk to the church to get some exercise, but I only put the road name into my phone which estimated a 25 minute walk. Alas it was a very long road and once we got there we discovered we were another 20 minutes from the church with the service due to start in 16 minutes. As I had taken charge of this particular part of the day my wife was slightly annoyed that we were now forced to half jog up the road, dodging muddy puddles, whilst wearing our wedding clobber. I was pleased because it meant that I wasn't taking a day off from exercise. My wife was annoyed, but because we were running it was hard not to laugh at the situation for some reason. Luckily one of the other guests saw our predicament and got their mum to turn round her car and pick us up. We got to the church with two minutes to spare. I told my wife that she could always trust me as I am reliable. You just have to believe in me.

As it happened if wouldn't have mattered if we were late because the bride kept the jittery groom waiting at the altar for about half an hour. I remember when my wife kept me waiting for about three minutes I had convinced myself that she'd had second thoughts and gone running off with the bridesmaids to start a new life, so God knows how this guy felt. But there was never any doubt that she wouldn't show.

The Catholic Church was decorated with carvings depicting the various stages of Christ's crucifixion. The one next to me was "The nailing" which seemed a bit blunt (ironically). Is there not some Holy (no pun intended) euphemism for that? I am not even amused by the double entendre of the word, "nailing" here. It just seems a bleak word, even if it is describing a bleak thing and the Christians usually come up with more spiritual sounding descriptions like the eucharist or the passion or whatever. It made me think about the person who had done the actually handiwork with the hammer and nails. It might have been more than one person working as a team, but it seems more likely that one bloke did each crucifee and thus that one person is responsible for killing God (if you ignore the guy who helped him along with the spear in the side). It's pretty surreal that anyone's job could be hammering nails into people, so if this person was cool with that then it probably didn't make much odds to him who he was "nailing" (again no sexual pun intended). But did he get any clue that this was different? A mortal killing a God (even one who can regenerate) is a pretty rare occurrence. In a sense it's quite an achievement. But also, in hindsight, a bit of a faux pas. When he dies and goes to Heaven and Jesus is there waiting for him I expect there was some awkwardness. Espeically given that I don't think the nailer would have any idea who Jesus was. Presumably he nailed a lot of people in his time and it's unlikely that he'd be able to remember them all. So unless something extraordinary happened, like light came out of Jesus' wounds rather than blood (and if that had been the case then I am not sure that the nailer would have gone on to make the other three wounds - he'd have been freaked out and run for it, or bowed down and worshipped him or at least apologised), then I think Jesus would have to remind the executioner who he was. And the hammerer would have had to pretend to remember. And then Jesus would have said, "Well mate, I have to tell you, you're in a lot of trouble here. You killed God. And even though we needed you to do that in order that all human beings might be saved, I can't really give you any bonus points as you didn't realise that at the time."

He might have argued with Jesus, saying, "Come on mate, I was only doing my job. No hard feelings. I wouldn't have killed you if I'd known, obviously. You should have said."

But as forgiving as Jesus is, there's no point in having a Hell if you just let everyone off for their crimes. And killing Jesus has to be the worst thing anyone has ever done. At the very least it would be embarrassing, even if Jesus did let you off. But also still pretty cool. When you thought that God and Jesus weren't looking I think you'd go around telling people that you killed God.

And even if Jesus turns out not to be a God, but just a zealot and revolutionary (which he must have been if they were crucifying him, because that was the punishment for that crime), then the man hammering in the nails still ends up being one of the most important figures in history. Without him doing that the whole future of the world is different. We might not even remember Jesus at all without the nailing and the nailer.

In an unusual twist the priest taking the service was the bride's brother. She's a comedian and he used to be as well and he kept the 300 strong congregation entertained with gags and routines, involving mocked up photos and a petrol driven leaf-blower. It was unlike any wedding I have ever been to and very entertaining. He pointed out the potential headline, "Brother marries sister and is also her Father."

The church was filled with joy and laughter and the religious side did not overpower the occasion. Which is really what a wedding should be. Celebration not solemnity.

And the fun continued into the evening with a reception in a massive old-fashioned cinema in Stockport. I did some vigorous dancing to offset my calorific intake and chatted with comedians and at one point (and I can't quite remember why) had to lie on the floor to arm wrestle a woman. She challenged me (I think because I was deliberately making the records jump by banging my foot on the floor and I sort of assumed she thought she could take me and was going to teach me a lesson. But I defeated her with ease. I have never felt so manly. I also got my photo taken with comedy legend, father of the the bride (and the father), Jimmy Cricket, who is one of the loveliest men you could ever hope to meet.

It was nearly as good as my first wedding (just keeping wife number 1 on her toes there). It's only marked down for having pictures of a man having nails driven into him during the service. Some people are into that kind of thing, but for me it has no place in a ceremony dedicated to love. If had been consensual nailing then I guess that would be OK, but it was not. It is not OK to nail people who don't want to be nailed to things.