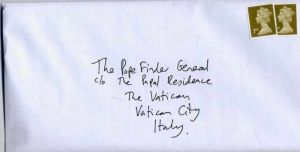 Poor old John Paul II. He was a candle in the wind. A candle in the wind that opposed homosexuality and using condoms to prevent AIDS, but it takes all kinds of candles in the wind to make a world of candles in the wind.
And I think enough time has gone by since his passing to start talking about who shall be his successor. And personally I think it should be me. Which is why I sent off a letter to the Vatican today putting myself forward for the post. This may be a bit presumptuous as they haven't yet put the advert in the Guardian jobs section, but I think they will appreciate my keenness.
Here is what I wrote,

Dear Popefinder General,
Like probably nearly everyone (apart from diabolists, gays and people who think we should try and stop AIDS spreading) I was saddened to hear of the passing of Pope John-Paul II. He was really good at being Pope and so it's a shame that he can't be any more, but on the bright side he must surely now be up in Heaven enjoying everlasting life in paradise, which, as is my understanding is the whole point of being Christian and stuff, so really we should be happy about it, don't you think? There was always the chance if he's lived longer that he might have done a really stupid sin or something and been barred from entry, so in a sense it's good he died. I am not trying to make light of a man's life (and I could, because he was called Karol and there's hundreds of jokes I could do if I wanted), I just think you probably knew him quite well and must be sad and I was trying to look on the bright side. He's probably met Jesus already and found out which of the contradictory stuff in the Bible was actually right and whether the bread and wine literally becomes his body and blood or whether he was speaking metaphorically. I expect John Paul and Jesus had quite a laugh if it was the latter. That would be embarrassing for the Pope. But Jesus wouldn't hold a grudge - he'd forgive him. That is His job and I for one think he does it well and also doesn't get a sexual thrill from shitting Himself like some blasphemous fools maintain.
Anyway, sad as the Pope's death is, there does come a point where life has to go on and we have to get on with things. I've waited over 36 hours and John Paul isn't coming back (unlike Jesus, who surprised everyone that time back on April 9th 30AD).
So I think it's time to think about who will be the next Pontiff. Doubtless you've been giving this a bit of thought over the last few weeks while John-Paul was ill (though to be polite you really should have waited til he was dead before you started that speculation, but I am a forgiving man - please make a note of this - and I'm not going to make a fuss about it).
Anyway, what I am saying is that despite the fact that I may not be on your current list of candidates I was wondering if I could throw my hat (I don't have one of those little round papal ones that are a bit like a Frisbee and so would be good for this- well not yet) into the ring.
You might think me an unlikely choice as I have never held even a minor office in the Catholic Church, but I think I might be quite good at it anyway.
Here's why:
1) I am relatively young for a Pope. If you keep selecting popes in their fifties and sixties then obviously you are going to have to go through this rigmarole every decade or so. I am only 37 and two of my grandparents lived to over 90, so I think there is an excellent chance that I could reign for the next 50 years. Which mean you wouldn't have to bother to think of another Pope til around about 2055. Let's face it, by then the world will probably have ended, especially if we keep the rule about the condoms going, so your job would be done and you could put your feet up.
2) Although I am not very religious and if pressed would say I am an atheist, I do have quite a lot of experience of church. My mum and dad were Christians and forced me to go to church about four times a year when I was little. I really hated it. It was so boring and stuffy and sanctimonious. Once I got into my 20s I refused to go to Church again, unless it was for a wedding or a funeral or Christening.
But I do like some of the super powers that Jesus had and also some of the hymns were fun. And I've read most of the Bible and learnt the first page of the New Testament off by heart. If you give me the job I will definitely learn the other stuff and also if people ask me say that I believe in God and stuff.
3) I am actually Godfather to my nephew Andrew and even though I don't believe in God I take my duties seriously and every now and again I say to him, "Believe in God" and similar. This should give you an idea of how I would be able to lie and be a hypocrite to be a Pope who tells people to believe stuff that no intelligent person would think was true.
4) I would really like to live in a big palace and order people around and stuff and think I would be good at it. Also I have been meaning to learn other languages, which is something a Pope has to do, so that would kill two birds with one stone.
5) I think all people are equal and have a right to do whatever they want as long as they are not harming other people. I think Jesus said something similar. But like all the other Popes I am prepared to ignore this and say that I hate gay people etc if that means I get the job.

There is one other thing I think I should probably tell you now before you find out once you've given me the job and it causes any embarrassment: I was not actually brought up as a Catholic (my mum and dad are C of E), nor have I converted to Catholicism or really even been to a Catholic church. My brother-in-law is Catholic and I think I was best man for a bloke who might have been Catholic (it was some weird branch of Christianity anyway), but that's about as far as it goes. To be honest I've always found the Catholic religion a bit showy, which seems at odds with Christ's message to me, and also you can't seriously mean it about transubstantiation - that's just weird. But having said that I have really enjoyed my two trips to the Vatican and the Sistine Chapel and would be prepared to overlook my disdain for the way that all Christian churches have warped the message of Jesus if it meant I get the fine robes, jewels and free air travel etc.
I hope you won't hold this against me and will give me some marks for my honesty. I think I deserve an interview at least.
I understand if you can't give me the job this time round, but hope you will keep my letter on file for the next time this happens (which should be pretty soon given the way it's worked so far - see my first point).
I have a few gigs around the country, but could probably re-arrange them if you want me to start straight away. Monday would really be the earliest convenient date for me, as I am playing Croydon on Sunday.
Again bad luck about John-Paul and I am looking forward to being your boss.
RK Herring