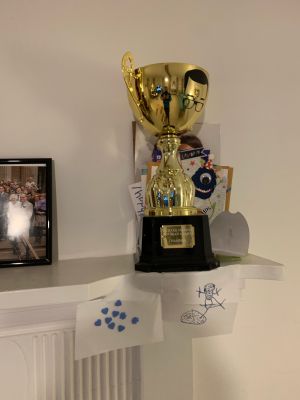 Woke up at 3.30  and of course couldn’t get back to sleep. Checked my phone. Kept checking. Why had the projected result not been reversed as I snoozed this time? It can only go from good to bad and bad to worse. I am very sad that Boris has got this mandate to do whatever the fuck he wants. Some commentators think the size of the majority will allow him to go more towards the middle ground and not have to kowtow to the extremes of his party, but nothing is certain with Johnson. I remember thinking May might be a kinder PM (not sure why given her track record) but I can’t imagine having approval will suddenly turn BJ all humble. There is much to fear. Perhaps those fears will come to nothing, but all the predictions have come true so far. If the election is a vote for Leave, then Scotland must surely have also voted for another referendum. And why would they stay with the Tories in charge for the next decade at least? And what about Ireland?
Will we be left with the united kingdoms of England and Wales, with unchecked nationalism of the most depressing kind - bullish and unjustified pride?
Maybe not. But there’s a definite maybe too.
I had assumed Corbyn would resign immediately, but Labour seems intent on self-destruction and unable to learn the lessons of the eighties and the twenty tensies and I fear we’re not going to get the grown up opposition that we need now (and to be fair over the last four years would have helped). There is much to like about Corbyn and only a few things to bemoan (though some are pretty serious), but I had thought that he might have breathed a tiny sigh of personal relief amidst the pain of defeat and feel pleased that this stressful time was coming to an end. I really hope Labour can sort themselves out. I’d really like an alliance of opposition groups. But I fear we are going to have to instead just pray that Johnson will turn out to be moderate and kind and good and not just think about looking after himself.
Definitely maybe not.
Luckily my job was lots of fun and took my mind off it. Even if I was flagging by 5pm and fell asleep in the car on the way home (wasn’t driving).
I was back in time for the House of Games denouement which was as tight as my pants and I came within a whisker of throwing it all away. How did I think a pretzel was a bagel - it had taken me so long to remember Elaine Paige that I didn't think about the easy bit. Even though I knew what happened I could hardly face watching it. But somehow I squeaked through, not to win the day, but to win the week. Who needs a Pointless trophy when you are one of the select band who has a double HOGger?
Me. I do.
There’s a bonus audio RHLSTP with Seannn Walsh up today. It’s very funny, but also very honest about what it’s like to fuck up and be judged by 15 million people. Tune in here