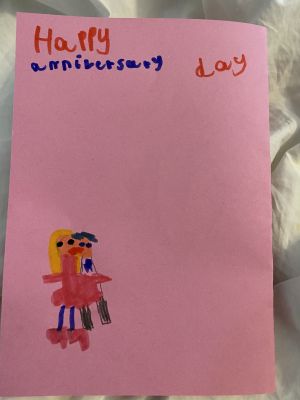 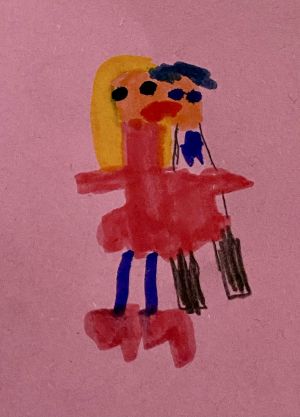 I have been married for 9 years today. So has my wife. Weird coincidence.
My daughter made as an “anniversary day” card and for a beautiful second I thought that her affections has switched and that she loved me more than her mum. It seemed like she has scored 8 for Catie and 10 for me, but then I realised that the 8 was actually an infinity symbol. So I am still lagging. But 10 isn’t too bad compared to past scores. And I love my wife infinity too. Possibly even infinity plus one.
Phoebe seems to have captured us in the drawing, though we appear to be either sharing a mouth or in the middle of a big snog. And I may be standing on a step (or Catie is carrying me). Either way this image is my new Twitter profile pic.
My son's card had a drawing of a snail on the front (which was a bit left field) and a big red splodge inside, which was apparently me falling into some lava. Future generations will assume that this is how I died, so often has it been represented in art. It's weird that now both my children are making this the main association with me, but there's no stopping the rumours now.
My wife has always been exceptional, but especially over the last couple of months, which I think have been emotionally harder for her than me (which doesn’t make sense given our respective numerical worths). But it feels like we might be out the other side of the cancer unpleasantness now and the chemo side effects have gone too. Other challenges will be in our path, no doubt, but we will navigate them together. And as I keep reminding her, if it all goes wrong, then we’ve done 9 whole years. That’s a respectable innings. We can end it now with our heads held high.
We had a takeaway to celebrate, but after a month or so of eating home cooked and healthy food the Thai food left me feeling bloated and immediately a bit queasy. I seem to be giving up everything, so I suppose adding takeaways to the list isn’t too much of a loss. Especially if they make me feel immediately ill. It also seemed to add a kilo and a half to my weight, which doesn’t make sense as I didn’t eat that weight of food.
Still not quite in the right frame of mind for serious work today, but I did manage to do some legwork for booking guests for RHLSTP, including the upcoming gigs at the Clapham Grand in May, June and July that you should be able to actually attend. Very excitingly I have booked Anneka Rice for the 21st April remote record. Also we’re going to start re-releasing some classic eps on Fridays next month (to give newbies a taste of the back catalogue), so I started thinking about which ones are my favourites.
Very grateful to the extremely busy John Oliver for giving up his day off (and his fee to Scope) for this surprise RHLSTP. Listen here
Watch here
See if you can spot Chris Evans’ (not that one) Hitchcock cameo.
You can see Catie and me taking part in Who Said That? Either on video here
Or as a podcast