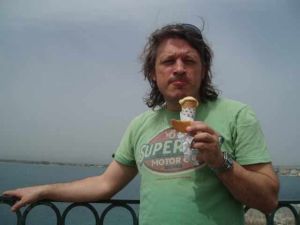 The thing I think I miss most about Britain when I am away (and this is slightly tragic) is the Guardian newspaper. It is, at least, one of the first things I crave upon my return and it always delights me however short a period I have been away. It is possible that the Guardian newspaper is the most constant thing in my life. I have been buying it, pretty much every day, since I was 18. In those days I used to buy the Sun too as a kind of ironic gesture (outwardly at least - I think in truth I probably enjoyed it on a non-ironic level too), but I got fed up with its nastiness and gave up on it completely around the time they took the piss out of Frank Bruno for being mentally ill. But the Guardian has remained.
And I miss it. More than I miss my friends or family. Yes, you are right, I could look at the online version, but that's not the same. I need to have it in my hands, to touch it, smell it and have that palpable contact with home and what's going on in the world from a slightly leftish political perspective.
Yesterday, at breakfast, when passing the table that the hotel has with few Italian and international newspapers, I commented as much to myself as anyone that I wish they had the Guardian on there. Today, magically (and I don't know if someone had overheard me, though I very much doubt it) Thursday's international Guardian was on the table, attached to one of those long rods that they have in libraries. They are quite unwieldy, especially in a breakfast table context and I am never certain if you are allowed to take the paper off, provided you have a go at putting it back on later, or whether you have to keep the rod with you at all times, as a reminder to yourself and everyone else that this is NOT your paper.
Anyway, after five whole days away from my beloved Guardian I was positively and absolutely thrilled to have it in my hands again - even if it wasn't quite the genuine article and was all in black and white and had the sports coverage attached to the main paper and only a very thin and weedy G2 section. I tried to read it with the rod attached, but got annoyed and took it off and was unfettered in my perusal and no longer felt that I was visiting a newspaper in newspaper gaol.
The quick crossword and the suduko were there too. Even though I have a book of Guardian sudukos (not with me on holiday) I don't really like doing them unless they are in the actual paper. It doesn't seem right somehow and it's part of the religious experience to do them daily, on the actual newspaper. This was a shared paper and so perhaps I shouldn't do the puzzles, but I knew that I had already decided to steal the tiny G2 section and make the suduko and the quick crossword my own. It was not theft, because it was based on love and thus was much closer to pornography if any sin was involved at all (I did both the crossword and the suduko in record time, despite having my first mild hangover of the year - it felt good to be in such hot puzzle form).
I read the main bulk of the paper over breakfast, enjoying catching up on what was going on in the world two days ago and then made a lame attempt to reattach it to the rod, but in the end just wrapped it loosely around the wooden pole and put it back on the table. I think the Guardian appreciated the gesture. It would give it at least a few minutes of unshackled freedom before its guards and captors realised what had happened and put the cuffs back on. And the paper knew that its small child, the G2, had been liberated and would be outside in the sunshine, being used for its intended purpose, its puzzles completed by someone who loved it (I wish I hadn't used the pornography imagery before as I have now made myself admit to have used child pornography - but then as we all know Guardian readers are worse than paedophiles anyway, so maybe this will have raised my status in most people's minds).
Surrounded by beautiful buildings and in the hot Mediterranean sunshine, it is sad, is it not, that the thing that gave me the most pleasure was this tissue paper like rag and realising that a nine letter word for building was "structure" meaning the easy quick crossword had been completed. It is hard to wean ourselves off our daily fixes.